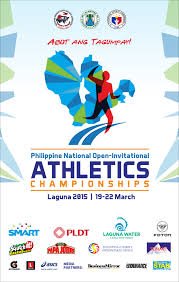 BELOW IS A REVISED SUMMARY OF REASONS FOR MOVING NATIONAL OPEN

The National Open had been moved from November 19 to March 19-22 in Laguna.

The 2015 Philippines National Open Invitational Track and Field Championships. To be held at the beautiful stadium at San Luis, Sta. Cruz, Laguna, Philippines. The competition dates are March 19-22.

Billeting of local teams are still under negotiations with the Office of the Governor. Other details are to be announced later.

Below is the event page

The meet will serve as the last chance for athletes to qualify for the 2015 SEA Games. Held in June in Singapore, and also part of screening and evaluation for inclusion into the national team.

Guarte finishes fourth at the 2013 SEA Games in the 1500m. Jironi wins in 3:58.01 one of the slowest winning times in SEA History with no one wanting to take the lead.

Mervin Guarte aagain leads an all star cast in an epic four way dance. The National and National Junior Record Holder in this event got a good sniff at the SEA Games Gold in 2011 in Palembang, only to be deprived of the victory in a sprint victory to pocket rocket Ridwan of Indonesia. Guarte recorded 3:47.65 to Ridwan 3:47.63 a time which he has not been able to improve on.

Despite having four beautiful national titles his best in 2014 was 3:55.10 when he was largely unchallenged.

However this year an old college foe (formally JRU now working at PLDT) Roldan Verano battered down his best time from 3:59.74 at PNG (June) to 3:55.3 during the weekly relays (August).

Also int he passenger seats are the training partners of the above, under the SEA Bronze medal of (3:58.37) is Roldan’s training partner Rudyfer Hernandez (3:57.8) and Guarte’s buddy Maulas (3:58.30).

Its a deep field with Sonny Wagdos (Davao), John Rued Acanto (Perpetual), and Jomar Angus (FEU) all also under the four minute barrier.

Several Fundamental questions need to be answered and indeed they will be come the National Open in Santa Cruz, Laguna March 19-22. On paper the favorite is Mervin Guarte (Philippine Airforce) (PB 1:50.65) who has been the champion of the Philippine Islands four years in a row. The 23 year old is the SEA Games 2011 and 2013 Silver medalist in his event. The proud owner of a beautiful pink house in Mindoro and a prized herd of cows and  Tamaraw’s.

Challenging him is his training partner Wenlie ‘The Fishman’ Maulas (Philippine Airforce) (PB 1:52.52) who is a multiple UAAP Champion and was the silver medalist at the SEA 2013 National Games. The duo are trained by veteran national coach Ojon Artiaga.

Also in the race will be Marco Vilog (Lyceum of Batangas) (PB 1:54) the 2014 PNG Bronze medalist showing fine form in training after mainly focusing on long runs due to the lack of an athletic track in his locale. ASEAN University Games Silver Medalist Elbren Neri (UST) (PB 1:52.60). Roldan Verano of PLDT is also an outside chance of a medal but with 1:52.9 will find the pace more bearable in the 1500 Meters.

Unfortunatley last years silver medalist and former cat bite victim Paul Billones (PB 1:51.74) will not feature in this race due to commitments on Basic Military training with the Philippine Navy.

Despite this its a strong field with the best the Philippine Islands has to offer.

So many questions to be answered

Will the draining 52.5 first lap pace be unbearable for the rest of the field?

Will Jericho ‘Muslim Magnum’ Ejerctiro pace make in 52.5? and then hit the lactic hurt locker the last 200 meters?

The SEA Games standard is 1:51.62 as of now only Guarte has hit the mark. Will anyone or who will join him in Singapore?

A time of around 1:50 is required to put the Philippines on track for the SEA Games Gold medal in SIngapore this June. Certainly if this shape is not found then the cunning plans of Duong Van Thai (Vietnam) the SEA Games 2011 Champion will be unstoppable and the gold medal will be dangling around his neck. DVT ran 1:49.23 at the Vietnam National Games, the fastest time in South East Asia this year. Two days later he jogged home in a time of 1:50.99 at Palembang to win the  ASEAN University Games title.