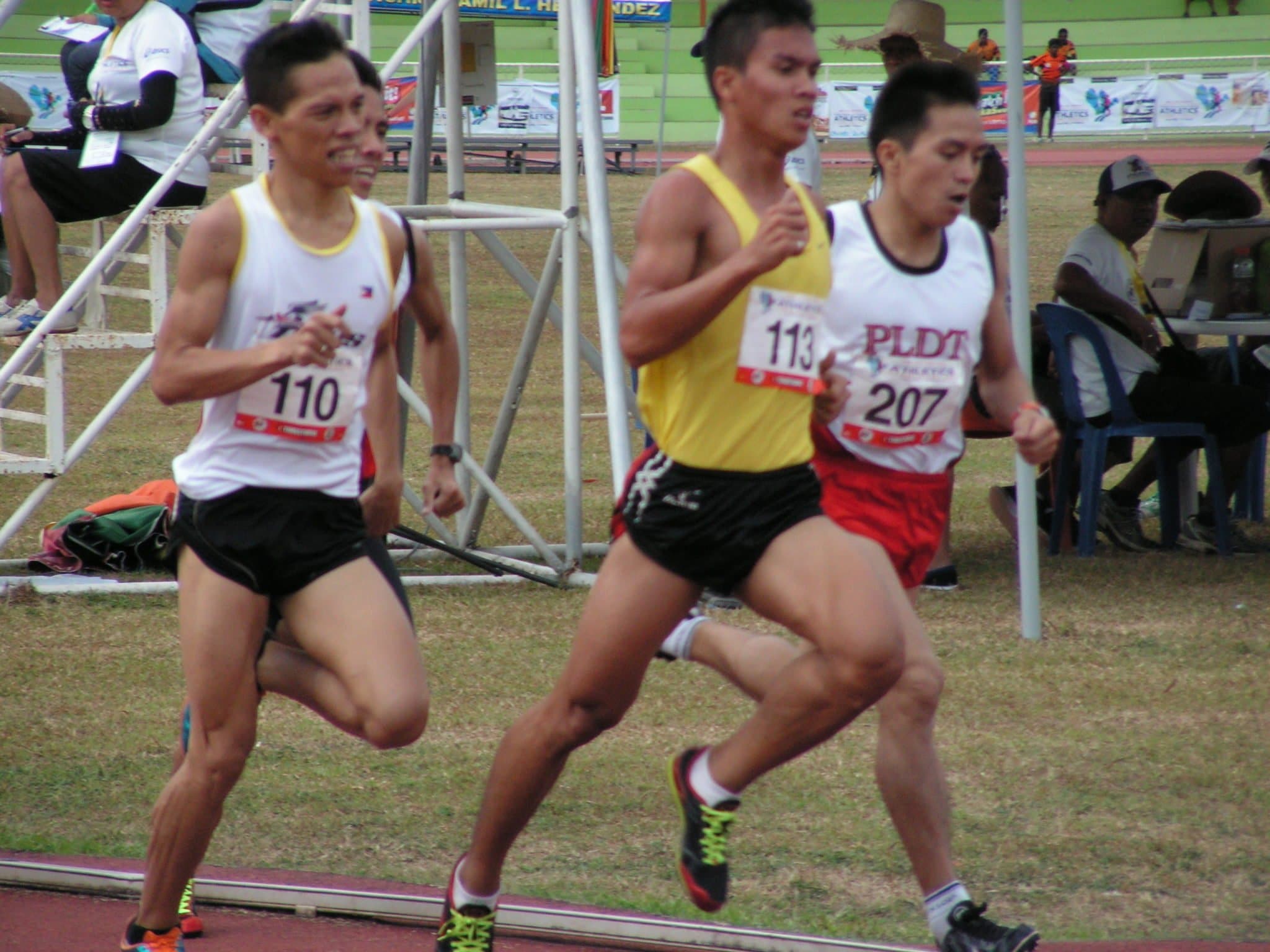 SANTA CRUZ LAGUNA, National Record Holder Mervin Guarte was king of the 1500m on the third day of the Philippine National Championships in Laguna. The 23 year old running for Team Rio stuck behind the leaders on the first few laps before kicking with 800m to go. Guarte who won his fifth national title, secured his place in the SEA Games lineup with another Gold medal standard of 3:54.58.

It was a quality field with the surprise coming from the very aggressive Sony Wagdos (Team Titus) who ran 2 seconds below his best chasing Guarte all the way to the line in 3.55.72.

Another athlete of four who had hit the standard for the SEA Games Rudyfer Hernandez of PLDT came in third in 3:58.47 ahead of two Malaysians, Wenlie Maulas 800m silver medalist, Ebren Neri.

Roldan Verano who holds a PB of 3.55.10 and was the other seed for SEA Games suffered some cramps and ended up ninth.

NCAA Record Holder Mark Harry Diones leapt his best wind legal jump of 15.84m +0.5 to take the National Title in the Mens Triple Jump. Diones effort fell short of the 16.26m qualifying standard for the SEA Games. The 22 year old from JRU had leapt a 15.96 +2.9 at the NCAA a few weeks back. His older brother Melbert was second in 15.34, with third going to NCAA Silver medalist Ronne Malipay.

Another athlete to miss out on the SEA Games mark was Junrey Bano the many time national champion and 2011 SEA Games Gold medalist of the 4×400. He won the race in 52.91 from Mohd Firdaus Musa of Malaysia 53.54. However the performance in the heats was a bit faster at 52.82. Bano had missed out on the SEA Games qualifying mark of 51.79. NCAA Record Holder Francis Medina another athlete of Coach Trece of Perpetual won the boys 400 Hurdles in 53.64.

Lasangue strikes back – after having being dropped last year

An athlete that was removed from the team for failing to qualify and medal in two SEA consecutive SEA Games, showed that there is a path way to redemption for athletes in the new fair selection system. Manuel Lasangue Jr. of Meralco tied his personal best of 3 years ago with a leap of 2.10m. Just 3cm away from the SEA Games record but puts himself back into consideration for the national training pool after being removed last year. Lasangue who has been pritty much training on his own was one of the surprises of the national championships.

The event was won by Muhd Ashraf Saipu Rahman in 2.13m, part of the very strong High Jump stable of Malaysia Athletics.

Bagsit wins but Udtohan and Toledo are the new blood

It was two young sprinters that also shone in this event. Second to Bagsit was Aries Toledo of Nueva Viscaya. Rumours came from the North of a very promising sprinter who had ran some quite fast times to win the SCUAA MVP title. This was first held in doubt as SCUAA times are not sanctioned official times of the PATAFA. However it came to pass that Toledo would prove a legitimate performer. The tall 22 year old actually won over Bagsit in the heats in 21.87 PB, and then almost matched this in the final in 21.88.

A proven Junior star Jomar Udtohan came off a little behind Jason Alexter of Malaysia off the curve. But with 60m to go Udtohan started piling it on and clocked an impressive 21.86 to win the Boys title. He was within ears width of the long standing National Junior Record of 21.84 held by Raul Romeo Abangan of Cebu and set 31 years ago.

Kenny Gonzales of Team Rio took his first mens National title in the Javelin with a PB of 62.96m, beating his old PB from 2013 of 62.10m. National Record Holder Danilo Fresnido, 43 was seond with 60.82m, and PNG Champion Melvin Calano of Team Rio was third in 58.92m.

Another fine performance came from Matt Crespo (TMS) who threw a personal best of 45.97m to win the boys Hammer outside the 47.91m record of Arniel Ferrera.

SANTA CRUZ, LAGUNA- Living up to the crowd’s expectations. Fil-Heritage thrower Caleb Stuart does a sweep in all three throwing disciplines. By winning the last event of the tourney which is the discus throw. During the 2015 Philippine National Open Athletics Championships here at the Laguna Sports Complex, Brgy, Bubukal, Sta. Cruz, Laguna on March 22.

Stuart leading the pack by etching a throw of 47.17m. Which is enough to outplay TMS Ship’s Joel Santa Mina. Sta. Mina marked a throw of 40.87m and John Albert Mantua of JRU who registered 39.10m. This win of Stuart is still not enough to erase the current national record at 52.10m. Still Stuart’s exemplary performance is a signal that he is one of the athletes to watch for Team PH on the 2015 Singapore SEA GAMES.