Under the auspices of the Ateneo de Davao-Office of the Athletics under Coach Emmanuel Rene “Noli” Ayo and the Ateneo de Davao University Varsity Parents Council, the league offer a better experience for athletes and coaches in the region by meeting icons of the Philippine Athletics in its “First Conference” on July-November 2015 with Elma Muros,

As they close their successful “second season,” they are inviting teams from different regions in the Philippines both in grassroots and élite levels to take part in the Blue Knights Track League Invitationals on 29-31 January 2016; the three-day event is not only an athletics competition but also includes training camps, coaching pep talks, and socials.

As of press time, Scottish Athletics Alumni Gary Grieve will grace the events to talk about “Education Through Sport.” Making Blue Knights Track League a one-step game-changer in Athletics by providing an innovative approach to organizing Track Meets in the Philippines.

BKTL Meet Manager/Commissioner Prof. Airnel T. Abarra confirmed this after he met with officials of the Institutional Communications and Promotions Office (iCommP) headed by Paolo Villanueva with Igy Castrillo and Assistant to the President for Information

Technology Bernie Jereza expressed interest in this kind of initiative.

So far, the live streaming of the event is a first for Philippine Athletics. The country’s mainstream sports, such as Basketball, Boxing, Billiards, and Volleyball, are commonly broadcast-ed. But now, followers of Athletics in the Philippines will have the convenience of viewing the BKTL from the comfort of their computers and smartphones.

In Athletics competitions outside the Philippines, it is commonly observed that their events in Athletics are well documented and broadcast even; it is simple inter-club competition. However, given that Athletics followers in the Philippines are a minority stakeholder in Philippine Sports, it is advocated to think creatively to promote the sport and not just depend on the usual means of communication.

Elma Muros-Posadas and Katherine Khay Santos with the Ateneo de Davao Track and Field Family during the Blue Knights Track League opening in July 2015. We are inviting you to join us for the finals on 30 January 2016

Indeed, the internet live stream broadcast of the Blue Knights Track League is a trailblazer in Philippine Athletics; despite its humble background and minimal resources, it sets the pace to make the sport more appealing to the masses and reach the widest audience proving we can support more the sport through creative means and not settling on mediocrity.

DAVAO CITY– With a total of 15 teams and full internet live-streaming coverage. The Blue Knights Track League Season two finals paved the way to setting new heights in Philippine Athletics Culture. Being the only truly independent and sustainable Athletics (Track) competition in the Philippines.

Showcasing that regular and consistent meets are a way to raise the culture of Athletics in the Philippines.

Blue Knights Track League showcased how Athletics meets in the Philippines on a grassroots level with innovation and independence.

www.pinoyathletics.info has been a constant media partner of the Blue Knights Track League. The event runs for two “seasons” without asking any single centavo from politicians, government agencies, and the National Sports Association for Athletics.

The BK Track League’s proponents, Prof. Airnel T. Abarra ([email protected]) with the Ateneo de Davao University- Office of the Athletics headed by Emmanuel Rene S. Ayo, proved that innovation and thinking “out of the box” is a way to promote the sport.

We will discuss how BK Track League can be a “first” model for other clubs and local government units to look at. Management–

By giving a chance for other people to become accredited technical officials, especially students. BK Track League used volunteerism as a way to give a strong staff during the event.

Tapping students, former varsity athletes, and other stakeholders to be properly recognized as National Technical Officials. By doing this, the event will push through even without tapping other technical officials that will act based on the merits of their respective agencies’ bureaucracy.

Through constant communication from different stakeholders who are truly concern with the sport in the Davao Region.

Through the Ateneo de Davao Varsity Parents Council, BK Track League provided people and groups to ask for food, refreshments, and simple incentives. The BK organizers want to instill athletes’ values not dependent on money but on the game’s love.

That’s why we are very thankful to our main partners:

Culture- By putting attention to details such as calling the athletes well and providing them a specific area where they can be screened and warm up, BK Track League proved that it could think of other ways to make it better by making athletes feel they are real athletes and can be organized properly.

An Invitation-With all been said and done. The Blue Knights Track League Organizers were already gearing up for the Season 3 Opening in July 2016.

So far, they are already looking on for a “reunion run” of two legends in Philippine Athletics, which we can’t disclose as of this time.

Still, we look forward to our Philippine Athletics stakeholders considering our model in running BK Track League. The event’s proponents are willing to share their ideas with other Athletics communities in the Philippines. So that we can build a better experience for our athletes and surely, people will come.

From its humble beginnings last year, the Blue Knights Track League is back for its second season. Its opening ceremonies fired off at the Fr. Martinez Sports Center Track Oval, Ateneo de Davao University Matina Campus, in 05-July.

It continues to strive to give better experiences and activities for the athletes of Davao and Mindanao as a whole.

Philippines’ Women’s Track and Field icons Elma Muros-Posadas and Katherine Khay Santos joined in and spent time with athletes of the Davao Region.;

Believing in that changing culture of Athletics as a sport in the “peripheries,” the Blue Knights Track League not only serves as an alternative venue for athletes in the region to get fully exposed on a regular and consistently run meet but also to learn from their idols in Athletics through a “track clinic” led by Coach Elma and Khay during the afternoon warm-up.

this was the ecstatic message of Coach Elma Muros-Posadas to almost 150 athletes with their coaches, chaperons, and trainers.

After hearing their messages, athletes were taught by Khay Santos on proper ways of doing warm-ups and drills before the afternoon session.

On top of this, organizers ensure that all athletes will be given snacks and refreshments during the whole event, not compromising their nutrition. Powered by 818 Sports and individual benefactors, we gave the winners simple incentives after giving the event bigger prizes on the first conference finals set in October 2015.

With the success of the first leg of Blue Knights Track League Season2, the Ateneo de Davao Office of the Athletics is firmly poised for its next edition this 01-August. 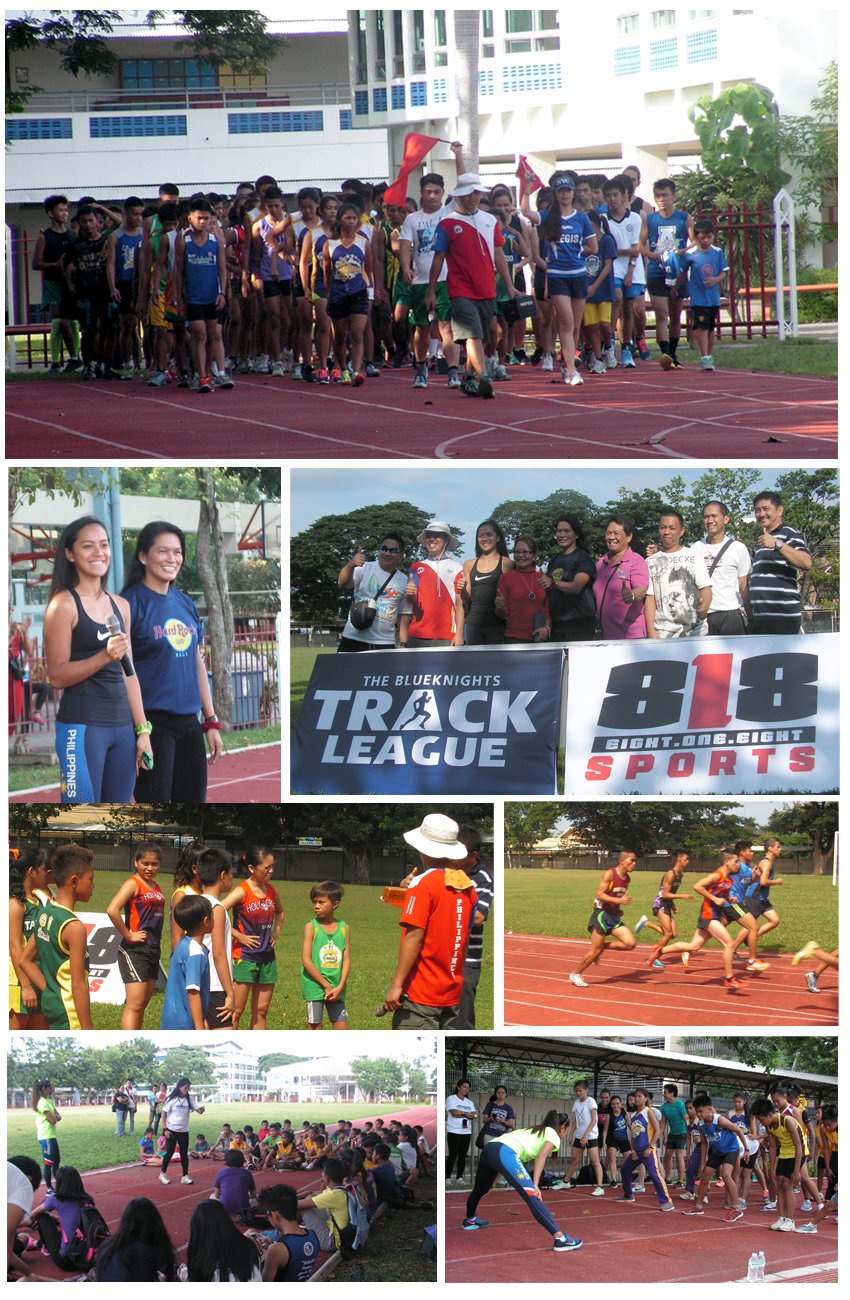