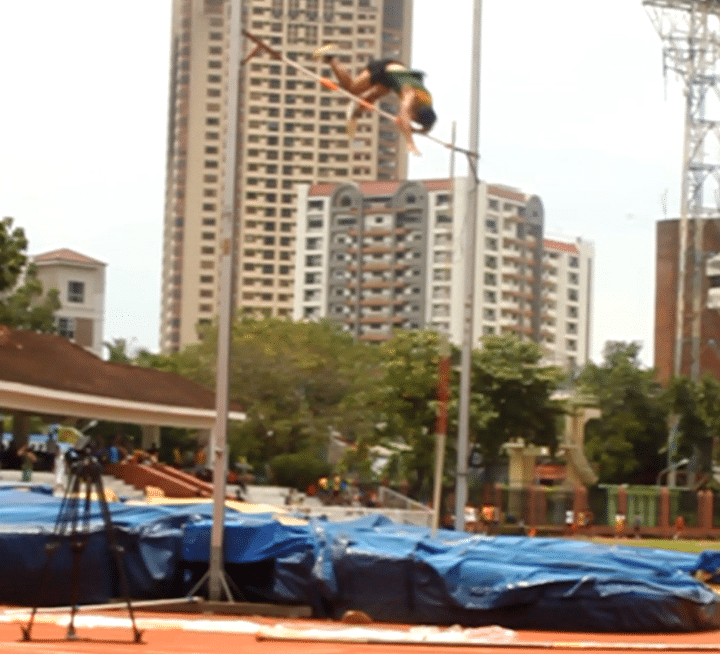 The next cycle of Schedule A-B-C will be the last chance for the athletes to qualify for the elimination finals. After this cycle, only qualified athletes and invited national team members will be allowed to compete.

However, national team members who did not qualify in earlier rounds of weekly relays would only be invited to events that don’t have lanes; they will be unable to participate in 100m, 200m, 400m, 110 Hurdles, and 400 Hurdles.

A decently strong Mens A Field in the 100m Dash. With #3-#4 and #5 at the National Games, Torres, Noval, and Lopena lined up. Also joining them will be UAAP Champion Jasper Tanhueco.

Womens A Race is fully packed

While the second heat contains a former member of the National Team, Honey Joy Ortaliz ’30’ up against some promising upcoming runners such as 15-year-old Karen Janario, the Batang Pinoy champion.

A special Junior Mens Race has been drawn up. The centerpiece is NCAA Bronze medalist Rodquem Maullon against National Junior Champion Romnick Nor and PNG Junior Bronze medalist William Galceran. 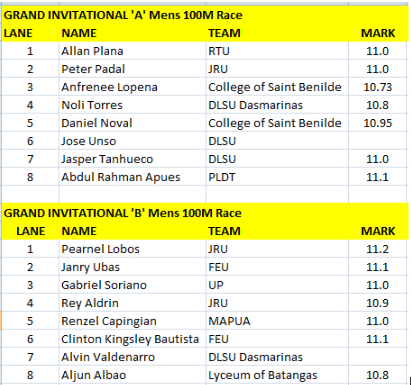 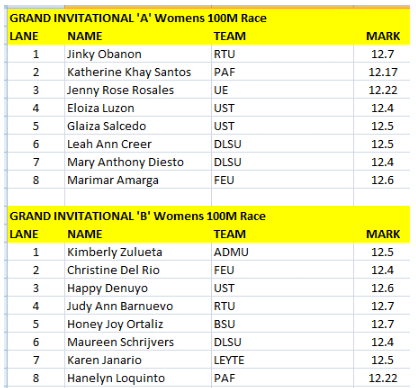 UST Tiger Cub Eloisa Luzon ended the local winning streak of Jenny Rose Rosales, 20 in the 100 Meter Dash. Rosales, who was undefeated since coming to Manila 2 years back, had won the last four Invitational A Races and is the UAAP Record Holder in the 100m,200,400m.

Luzon,18, recruited by UST last year, is the 2013 Palaro and Uni Games Champion.

A powerful start saw the petite sprinter placed in lane one pull away from the rest of the field, three clear strides of Rosales, who caught up but still fell one stride behind.  Luzon was rewarded with a new personal best of 12.2 seconds (hand-timed), improving her 12.4 clockings.

The Teenager will look to make her debut for the Philippines at the ASEAN School Games, where she is lined up in the 100, 200, and 4×100 meter Dash.

Both Rosales and Eloisa Luzon have been firm supporters of the weekly relays, and pinoyathletics congratulates them both for a well-run race.

Although one of our best local sprinters, Luzon is still in the shadow of several Fil-Heritage athletes led by Princess Joy Griffey and 16-year-old Kayla Richardson.

Her recent performance has moved her standing from 8th to 6th place in the 2014 Converted Rankings.

Thus, her coaches have displayed clear intelligence, who see her as more ready for the 2017 SEA Games.

All the invited athletes turned up except for Khay Santos. Had she been there, all eight would have run below 13 seconds. This is the fastest Weekly Relay Women’s race in recent memory. Some of the other races also produced sub-13-second girls in the top two.

It s good to see a boost in local women’s sprinting with more women showing up to run.

Ryan ‘The Duck’ Bigyan leads an all-star cast in the final qualification round for the Mens 400m Invitational ‘A’ Race. The 20-year-old Bigyan is the National Silver Medalist in the 400 Meter Dash. Bigyan will be up against JRU Jumper turned quarter-miler Harry Diones, who has won the last two invitationals A Races with a PB of 49.1.

Also in the race will be Diones three teammates, including NCAA 400m Bronze medalist Peter Padal.

Best of the B Race

The ‘B’ Race will also be quick with SEA Games 800m Silver Medalist Mervin Guarte in the middle, flanked by De Vera and Niels, named for the ASEAN 4×400 meter relay squad School Games.

Rosales and Obanon towards womens 4×400 at SEA Games

In the Womens 400m, Jenny Rosales and Jinky Obanon again battle it for spots in the SEA Games 4×400 relay. Rosales has won 4 of 4 invitational races, but in the third edition, dragged 19-year-old Obanon through to a 57.7 personal best. Obanon will need to take her best time below 56 seconds before the deadline for a good relay lineup next year.

As it stands, the duo would look to join Griffey and Zion Nelson in the womens 4×400 relay. Unfortunately, in the past 2 years, we have lost Krizia Apelar, Keizel Pedrina, Lorna Olarita, and Josie Malacad from our womens relay pool.

Silver Medalist at UAAP Neslee Angco is also in the race. 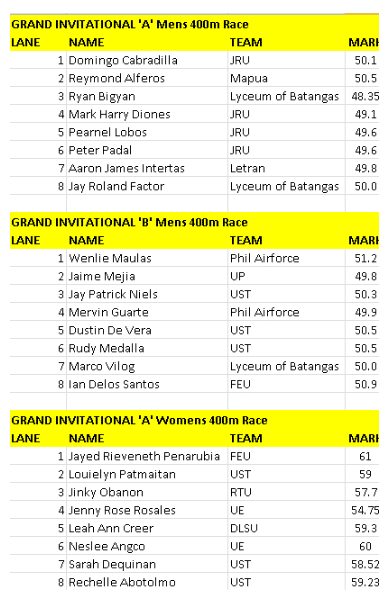 Hurdles is also an interesting lineup

First, in the Women’s SEA Games, Silver medalist in Heptathlon, the fastest Hurdler in the land Nars Atienza, 35, has been invited to race against UAAP Champion Michelle P. Loterte.  Also invited but unsure of attendance is Batang Pinoy champion Karen Janario of Leyte, 15.

In the Mens Race, CKB, who has won the last 2-3 editions, is a favorite. With PRISAA Champion Fransico and NCAA Champion Francis Medina, 18 also in the race. 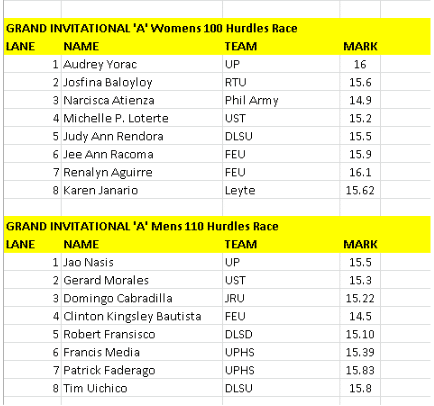 The last edition of Schedule B for 2014 Weekly Relays came to a close, with some national athletes making last-minute qualifying attempts for the finals slated November 15-16.

Surprise win for Michelle Loterte in the 100 Hurdles

UAAP Champion Michelle Loterte (UST) clocked 14.9 to hold off SEA Games Heptathlon Silver Medalist Narcisca Atienza 15.2. It was a late reaction from the 35-year-old Heptathlete, who has a personal best of 14.82, with Loterte easily gaining 2 strides before Atienza left the blocks.

Loterte, whose best is 14.96, hopes to get the UAAP board nod for selection at the ASEAN University Games in Palembang, Indonesia, December 12-16. In the last edition in 2012 in Laos, she took the bronze.

“I was surprised to win over Aty. Nars today I didnt expect that but am glad she helped me run this time today. Her start was very delayed i think I was two meters ahead before she left the blocks. Maybe she is just getting back into competition and I’m sure it will be more interesting in the final”

The 21-year-old Loterte, a former member of the national training pool, with absolute respect for her older compatriot she will meet in the Weekly Relay Finals November 15-16.

Other Athletes in action

Meanwhile, 2011 SEA Games bronze medallist Katherine Khay Santos (Phil Airforce) leaped 5.84m in the long jump to qualify with the best performance. Santos’s best is 6.25m from 2011, and her season-best is 5.90m from the Vietnam Open.

Meanwhile, in the women’s UAAP, Silver medalist Neslee Angco UE took the Invitational Womens 400m Dash, in the absence of teammate Jenny Rosales (who won’t he last four) to clock a seasons best 59.3 (PB 57.62) from Rechelle Abotolmo of UST 59.4 in a blanket finish.

*Official Results still to come these performances were from the timekeepers.

The Weekly meet has been in place for around eighty years. With evidence of earlier meets (reference from the Philippine Athlete Periodical, which ceased publication in the 1970s).

The modern weekly relays have been under Commissioner Jolly Gomez since 2011 and act as a supplementary program for Philippines Track and Field grassroots development.

The breeding ground of excellence in Philippine Athletics

The only snag was that electronic timekeeping operators were not readily available, and it is suggested to avoid further issues. The PATAFA would purchase its own equipment and train several operators, so it’s always available. Electronic timing is crucial as it’s required to separate very close finishes and needed to establish new records in track events.

Overall, I would like to say that Commissioner Jolly Gomez reviving the Weekly Relays was an excellent idea and great assistance for athletics. It provided the breeding ground for the development of depth in events. Also, talent emerges here of national caliber.

It also serves as a great grass-root program due to the sheer participation of athletes below 16.

It is definitely a ‘Sports for all program’; there is no entry or registration fee, and it caters to athletes of all ages of varying levels of ability. Meaning if you are not an A Grade or an elite athlete, there will always be a level of competition you can be comfortable with.

And had established other weekly relays in Bacolod and Isabella. The vision was that this would further spread into other parts of the country, such as Davao, Cebu, Iloilo, Baguio, and Leyte. Perhaps this is something to be looked at for future years.

The good thing about this Weekly Relay Series of events is that it gets better every year with constant evaluation and improvements being made. In addition, it addresses the needs and suggestions of the wider athletic community.

In the last qualifying edition of Schedule C, a powerful field has emerged for the Mens 3000m Steeples.

Former Five Times SEA Games Champion Rene ‘The Calve-man’ Herrera, who holds a personal best of 8:47, will headline the event. The 35-year-old Olympian had come back with a win against 2013 SEA Games Champion Christopher Ulboc at Vietnam open in June.

Christopher Ulboc will not participate in the race, and PNG Silver medalist Hernane Sore was invited but had not confirmed his attendance.

Just one Jessa just one!

Invited in the womens race are Herrera’s understudy PNG Champion Jessa Mangsat (Philippine Airforce, 11:10 PB)  and UAAP Champion Jenismyl Mabunga (Philippine Army, 11:26 PB). The SEA Games qualifying mark, which also happens to be the Philippine Record, is held by Fil-Heritage athlete Jessica Lyn Barnard (11:04.84). Mangsat and Mabunga will also match up at the weekly relay finals and the National Open next year.

This will be the last round of qualifying for competitors to try and make the Weekly Relay Finals on November 15-16.

The finalists will be announced next week.

The Weekly relays 2014 started in July and has been running continuously since. One of the oldest track and field events in the country started in the 1930s under various sponsors. And can view a review here.