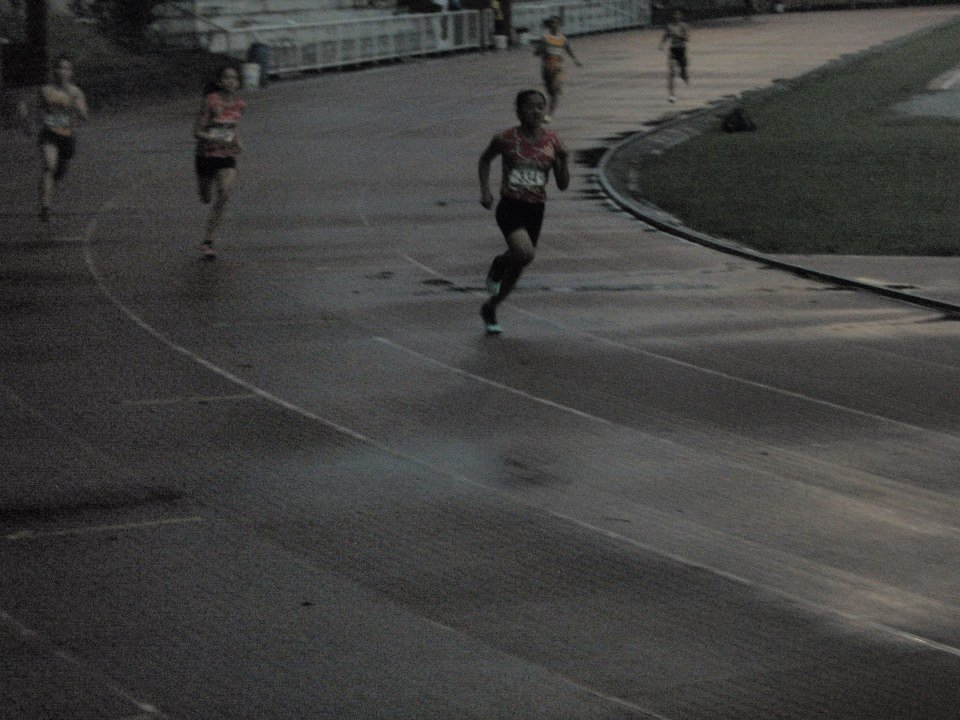 Jenyrose and cast of friends head greatest ever women’s 400 Final. The UAAP was canceled on Monday, December 8th due to hurricane Ruby. Tuesday saw a very wet track with weather conditions a lot colder than usual for the Philippines.

1. Rosales leads her friends to the greatest ever 400 Final in UAAP History

In the 400m Heats, it was UAAP Record Holder and former National Record Holder Jenny Rose Rosales who registered the fastest time in the first heat in 54.82. The second heat was won by her teammate from UE last years silver medalist Neslee Angco in 57.30 a new PB. It was a tough job getting into the final with 7 of the 8 qualifiers all needing to run below 1 minute.

Somewhat faster than in previous years. PNG 400 Hurdles champion Marylyn Avila FEU who came in behind Jenny (58.76) and Louielyn Pamatian (UST, 59.04). Both registered new personal bests along with Aldee Faith Denuyo (UST, 59.48). In fact, the competition was so fierce Palaro Champion and PNG Junior Champion Leah “The Bear” Creer of DLSU was unlucky to end up ninth and not advance to the finals.

Just nearly 2 hours later they were back at it. What in the store was an absolute treat of a race. Rosales who had drawn lane 3 had run down every athlete on the stagger including her team mate Neslee Angco by 150m. Rosales who had drawn inspiration from her coach George Posadas the other day after her crushing defeat in the 100-meter dash had the best race of her career.

Outside the National Record still

This was the first time in UAAP History 8 women had run below 1 minute in a UAAP Final.

This race has changed the landscape of Philippine 4×400 relay. Jenny Rosales is being groomed for the SEA Games 4×400 and national training pool. However, a new star has emerged in this race the skinny girl from Bohol Neslee Angco who may be in consideration as the fourth member of the Philippine relay team along with Fil-Heritage Princess Joy Griffey and Zion Corrales-Nelson. The quartet has a combined time varying from 3.38 to 3.41 based on improvements which is good for silver or bronze.

It was only a matter of time. They had clocked 48.0 in there leading up to the UAAP at the weekly relays a month before. The 3/4 Northern Mindanao team of UST comprised of 100m Champion Eloiza Luzon, 100m silver medalist Glaiza Salcedo and 5th in final Happy Denuyo plus 100m bronze medalist Michelle Loterte. The quartet made short work of the UAAP Record belonging to FEU of 47.91 set in 2012. UST led from the first change to the last and Luzon was given a commanding 20m lead which she never looked like one bit conceding.

Running through the line and pumping her fist in the air the Tigeresses time of 47.35 not only broke the UAAP Record but was the fastest time of the year. In fact, only the national teams time of 46.61 in the Thailand Open in 2013 has been faster in recent memory.

It was the young team of DLSU featuring three Palaro Champions Carino (Triple Jump), Diesto (100m) and Creer (200m, 400m) that was home second in 48.91 a school record. Jenny Rose and her friends from UE including Neslee Angco took bronze in 49.01. With the other four teams 2 seconds or more back.

3. Pole Vault is peaking for the Women’s

In the women’s Pole Vault Rechelle Abotalmo of UST. Who only began training under coach Emerson less than a year ago. Won the UAAP title in 3.10m a new PB.

Sarah Dequinan her training partner was second in 3.00m also a new PB. And Kirsty Kay Vinco of FEU improved her best performance by 40cm to join the 3m club as well.

Defending champion Katrina Baron ended up fourth in 2.80m outside her 3.20m personal best. Aldee Faith Denuyo another UST athlete helped rake up the points in the women division with a 20cm improvement to 2.80m to land fifth. This was the first time in UAAP History more than one athlete in the women’s division leaped over 3m in a UAAP Championship.

In what was also one of the greatest depth in the women’s steeplechase since back in 2009 when Jean Palencia and Frejielyn Roncales both ran below 12 minutes. It was Jilla Dela Rosa from UST who won in a personal best 11.51.07. 20-year-old Dela Rosa who was runner-up last year, took the win as record holder Jenismyl Mabunga of FEU did not line up this year instead of focusing on her enlistment with Philippine Army.

Audrey Yorac win in the Decathlon Hurdles nailed her 2/3 qualifiers for the 2015 ASEAN School Games in Brunei. Backing up after her 15.19 silver medal yesterday, the 17-year-old from UP added another time of 15.24 which is below the 15.33 standard for the ASEAN School Games.

In the Men’s 400m last years champion Isidro Del Prado Jr. withdrew after a hamstring strain forced him to jog the 200 Finals yesterday.  It was last years Bronze medalist, Gabriel Soriano of UP who was the fastest through winning heat 2 in 49.86, in fact, he was the only man in the heats below 50 seconds. The afro-haired Clinton Bautista of FEU last years silver medalist won the first heat in 50.03, just ahead of Michael Del Prado, the second son of national record holder Isidro Del Prado Sr. who was the surprise winner of the University Games in Iloilo in 50.11.

The Men’s Final was an interesting twist on events as well with Gab Soriano taking the early lead, and Clinton chose to wait. However, this tactic worked to the UP athletes advantage as Clinton had to spend all his energy catching the lead Gab had built to draw level. The pair was running neck to neck from 90 meters.

Gab then unleashed a devastating kick the last 40 meters to claim the UAAP 400 meter title. He ran a slight personal best improving from his 49.49 last year to 49.41. Clinton was second in 49.52. Michael Del Prado continued to make a name for himself with a bronze in a PB of 49.89.

Gab’s older brother Carlo Soriano was a former UAAP Champion for Ateneo in the 100m and 200m Dash.

The Men’s 4×100 of FEU with Ian Delos Santos coming in for Del Prado. Had a convincing win to defend their title in 42.39, Bautista, Jerwen Ebcas and William Galceran completed the lineup. DLSU led by 2013 100m UAAP Champion Jasper Tanhueco and popular actor

Jericho Ejercito battled on for silver without Patrick Unso. While UP led by 400m UAAP Champion Gab Soriano and UAAP Junior Record Holder in 400m Jaime Mejia crossed the line in third.

Training pool mainstay Kenny Gonzales was only able to manage 56.35m in the Javelin. Almost 6 meters below his personal record. Still, he was able to hold off his FEU rookie teammate and National Junior Champion Bryan Jay Pachecho who is also the palaro record holder in this event. Completing the trio is UAAP Decathlon Holder Janry Ubas who threw 47.98m for bronze.

Ubas added the Triple Jump crown to his titles with a 14.84m leap. Just outside his PB of 14.97m registered at weekly relays. While veteran FEU team mate Ian Delos Santos landed 14.19m PB for the silver. Former Palaro Champion Gerald Layumas of DLSU a member of the school’s soccer team made a come back for the bronze.