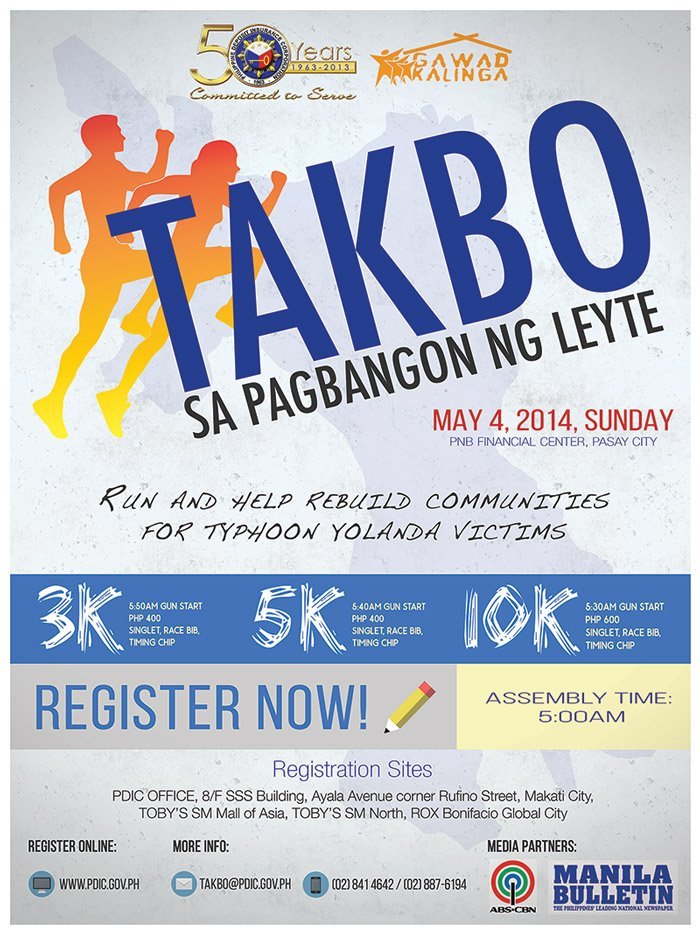 For more details, please refer to the poster below and the PDIC website at www.pdic.gov.ph.  You will also find the files about the Benefit Run attached.

You can view the race map here

Yes, they can also register online through this link:

https://regonline.activeglobal.com/Register/Checkin.aspx?EventID=1515052
The registration form can also be downloaded from the site

For more details, please refer to the PDIC website at http://www.pdic.gov.ph/pdic-takbo/takbo.html..

(Sept 30) Perhaps the most interesting race of this event was the Philippine Women’s 16.8k road race.  This was won by National 5 and 10k Silver Medalist Mary Grace Delos Santos originally from Zamboanga now representing Cebu

the 25-year-old held off teammate Mary Joy Tabal. Tabal (23) the 2011 National Bronze Medalist in the 5k was originally a 59 second 400m sprinter who has moved up into the world of road running.

Behind them was National 10k and Marathon record holder Christabel Martes, the 33-year-old veteran these days is an employee of Riovanna. Another veteran 30-year-old Former 2005 SEA Games representative and UAAP Stand out Nheann Bharcena was fourth. And in fifth place to add diversity was 15 year old Ana Jean Tamayo.

Full results can be found here at takbo.ph

Jessa Mangsat topped the female side with a time of 19:55 while Lovely Gemeroy clocked 20:38 and Annaleah Cierva 24:48 for second the third places, respectively.

*Herrera and Banayag are members of the national team

(Sept 17) CEBU, Philippines – Mary Joy Tabal added feather on her cap as Noel Tillor continued to make waves in the local running scene via the Philippine Society of Animal Nutritionists at the Terraces grounds of Ayala Center-Cebu yesterday.

Tabal reigned supreme in the 25K women’s open with the time of one hour, 43 minutes and three seconds. The little known Jennylyn Nobleza was a distant second with a 1:53:54 clocking, while Christy Sevilleno-Tutor finished third in 2:03:59.

Beboso dominated the women’s category with the time of 1:13:25, while Enriquez ruled the men’s side in 55 minutes and 21 seconds.

Joel Delposo stole part the show after dominating the 5K run in 18 minutes and 16 seconds. In the distaff side, the Andrin sisters Lovely and Cherry posted a 1-2 finish.

In the 3K action, John Cliff Debulusan and Jhean Andrin lorded it over in their respective categories. (FREEMAN)

They conducted a 3k, 5k, 10k and 21k (half-marathon) event, with the timing done with the IPICO Sports Chip.

The 3K Road Race was won by Kenyan Jackson Chirchir in 8:38, who has a best Marathon time of 2 hours 33.31 according to Allathletics. Second was former San Sebastian stand out Michael Bacong in 8:48, National 1500m Record Holder and double SEA games silver medalist Mervin Guarte (SSC) was third well behind in 9:20, with his training partner Michael ‘Topix’ Villamor of UPHR running with him at 9:21. The fastest women in the 3k finished 5th overall and that was Josephine Mendoza in 10:56.

National 5k Record Holder Mercedita Fetalvero (nee. ‘Bunso’ Manipol) was the fastest women the 30-year old former member of the national team jogged 18:37.2 well off her glory days of 16:40.81, but held off UAAP 5k medalist Mary Ann Dela Cruz (FEU) 19:00.5 who is in good shape coming into the next UAAP, and National Junior 10K Record Holder Jessa Mangsat (Baguio) was third in 19:13.0

The Mens 10k was dominated by Kenyans with 36- year old Willie Rotich 31:16 winning

Samson Tuwei was second 31:50, Eliud Kerring third in 32:32, Kiptala Kimuge 33:30, James Mirei 37:42.  The fastest women in this event was also a Kenyan Irene  Kipchumba who ran 40:10 (there is another Irene Kwamai Kipcumba who was a world championship finalist)

The Half Marathon was won by Kenyan Benjamin Kipkazi in 1:12.14 who edged out 10K national record holder Eduardo Buenavista 1:12.22, and National 10k Champion Julius Sermona 1:12.27 narrowly for the win. His Kenyan team-mate Philip Rono was fourth in a very close 1:12.35, and SEA Games Marathon Medalist Eric Paniqui was fifth in 1:13.55.

(NB. Could someone please comment in regards to the Kenyan runners and there best times etc.. over various distances. Are they working in the Philippines? Would they be fairly competitive at national level. Are they recreational runners? or just older runners or where very good at one stage?)

Full Results can be found here

Hyper Sports is now organizing another road run at General Santos as part of the 14th Tuna Festival Activities on September 2, 2012. This race will be called Get Fit Run- Gen San Tuna Festival for more information  about entering this run and registration please visit the Hyper Sports Website below