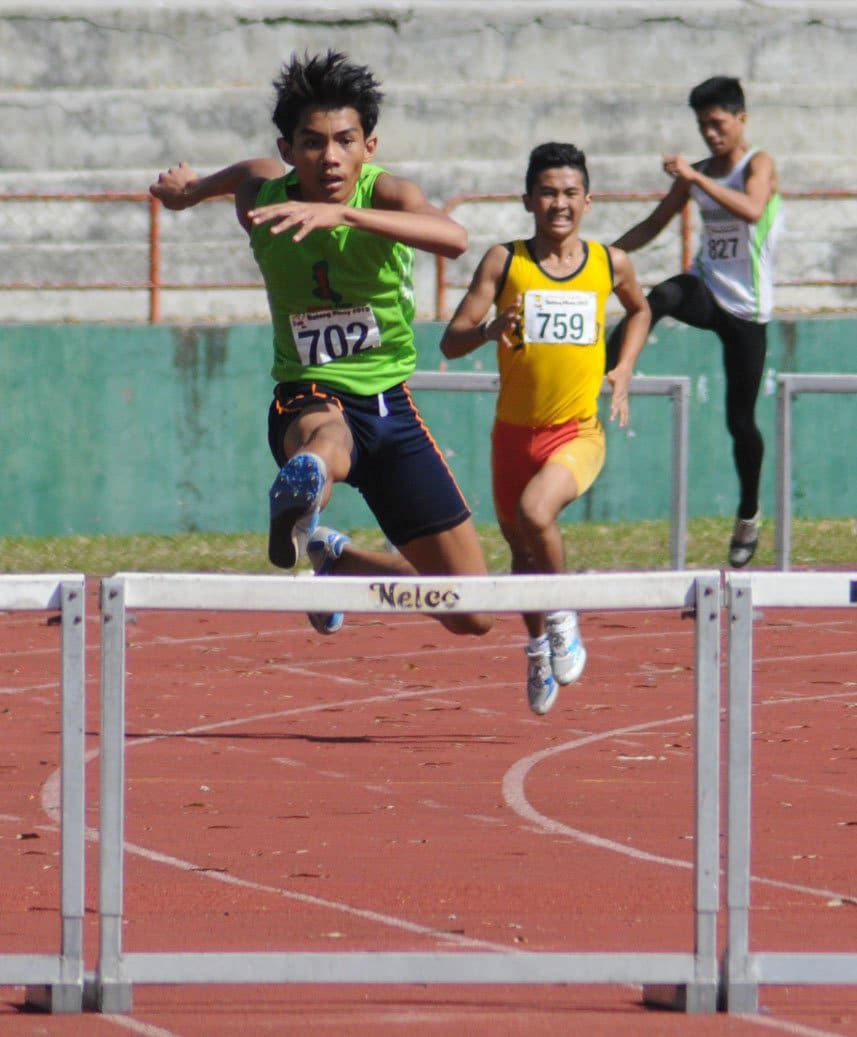 One of three Fil-Heritage vaulters who currently have a passport 18-year-old Paris Pijuan. Pijuan was in action at the Ben Brown invite. He improved his seasons best to 4.75m to finish third. Just outside his personal best from last season of 4.80m. Pijuan must clear 5.05m to qualify for World Juniors and 5.00m to hit bronze standard for SEA Games.

Newly found Filipino vaulter 17-year-old Paris Pijuan had the performance of the week with his leap of 4.90m at the Spring Break Invitational at UC Irvine. Pijuan whose father is a former PBA player then had three failed attempts at 5.01m. The mark of 4.90m was just 5 cm away from the Junior Record of Ernest John Obiena. Pijuan requires a leap of 5.05m to qualify for world juniors in Oregon in July and 5.00m to break the Philippine Record and SEA Games bronze medal standard for 2015.

Tyler Ruiz who finished 4th at the 2013 SEA Games in the High Jump recorded a season-best of 2.11m, slowly getting towards his best leap of 2.17m set last year at the USC Trojan meet before having three failed attempts at 2.16m. The SEA Games bronze standard is 2.13m.

Texas-based Donovont Ariola who is a friend of Eric Cray leaped a windy 7.50m (+5.3 m/s) just 3cm away from the SEA Games bronze medal for the 22-year-old who pledged alongside Pijuan and Ruiz to join the strong Philippine Airforce team at the National Games.

SEA Games 400 Hurdles champion and Philippine Record Holder Eric Cray opened his season with a 51.57s for the 400 Hurdles. Coach Keith Sharper reported that Cray could had gone faster but clipped the 6th Hurdle and had to regain his footing.

The Female Sprinters Griffey, Zion Nelson, and the Richardson twins had a well-earned rest this week, along with SEA Games 3000m Steeples Champion Jess Barnard.

At least not yet.

Philippine Amateur Track and Field Association president Go Teng Kok explains his position in the recent controversy involving his coaches during an interview, while at right, GTK shares a light moment with legendary pole vaulter Sergey Bubka,  who is currently the senior vice president of the International Associations of Athletics Federation (IAAF).
Additional photos by Danny Simon

Practically out of the limelight for the past year because of an illness that sidelined him for several months,  Go, or simply Teng Kok or GTK  to friends and colleagues,  is back to his usual self  —a passionate and fiery sports leader who speaks his mind when he believes he is right—never mind who gets hit in the process.

Go’s latest  ‘tirade’  surrounds the issue involving his two longtime coaches,  Joseph Sy and Roselyn  Hamero,   whom the Philippine Sports Commission, through the recommendation of Commissioner Jolly Gomez,  had suspended.  The suspension also meant that their monthly stipend of P20,000 each was also withheld.

In meting out the suspension,  Gomez cited as reasons the alleged “negligence and tampering of the attendance and record of the athletes”  committed by the two coaches.  Sy and Hamero, however, had denied the accusations.

A word from the AAA is the Asian Grand Prix has been canceled, this is bad news for most of our athletes such as Hurdler/Sprinter Eric Cray, Jumper Dagmil, and the Men’s 4x400m relay team who all won golds at the SEA Games.

They were looking at using this meet as preparation for the Asian Games. The move came shortly after neither Cray or Dagmil were sent to the World Indoors in Sopot as the PATAFA had run out of time to secure the visas for these athletes.

“Kindly note that the Asian Grand Prix Series 2014 will not be held this year. The reason being our two regular hosts, Thailand and China will be Organising two major events, the Asian Youth Games Selection Trials and the Youth Olympic Games, Nanjing, China.  Looking forward to your understanding on this matter.”

The Philippines will be represented by four athletes at the Asian Indoor Championships in Hangzhou China Feb 15-16. Three SEA Games Gold medalists will see action US-based Eric Cray, Henry Dagmil and Jesson Ramil Cid. As well as Ernest John Obiena who will be going after the standard for the World Juniors. They will be accompanied by PATAFA coaches Sean Guevara and Arnold Villarube.

18-year-old Ernest John Obiena although far off the 5.30m bronze, who placed fourth in the SEA Games with 4.90m holds the National Junior Record at 4.95m. Obiena is targeting the 5.05m qualification required to go to the World Juniors next July in Oregon, USA. He will need to also pass by the long-standing 5.00m national record of 3 times SEA Games Champion Edward Lasquette (Fil-Heritage).

The athletes are eligible for National Records if set from the day after their passports were acquired.

As the build-up continues for the 2014 Philippine National Games scheduled May 24 to June 1 in Pasig several Filipino athletes saw action and will be seeing action tomorrow at various locations around the globe.

At the Asian Indoor Championships February 15-16 in Huangzhou China, Eric Cray tied his National Record in the heats in 6.77s, qualifying for the finals. In the finals, he was up against a class field and finished fifth in 6.75s (again breaking his Filipino Record), this was .1 seconds away from the qualifying mark for the world indoors in Sopot (6.65s).

Francis and Ogunode are Nigerian imports who were naturalized and now run for Qatar. Francis broke the long-standing Asian record of Koji Ito of Japan 10.00s a few years ago.

Cray was placed in the slower B Final which he won but the four contenders in the A Final ran faster times.

Unfortunately in the 60 Hurdles Cray hit the first hurdle and wasn’t able to finish the race. Henry Dagmil is also entered in long jump and Jesson Cid in Heptathlon. No results reported yet.

Asian Indoors round up

SEA Games Decathlon champion and RP Record Holder Jesson Ramil Cid was coming second after the 60m with 7.07, but his opposition proved too strong in the shot put (11.35m) and High Jump (1.84m) where he finished last and now ranks seventh after 3 events, with 4 events to go on day 2. Karpov of Kazakhstan the Asian record holder in the Decathlon leads with 3246 points.

Overall it was a good outcome for the three-man team who placed 5th, 6th, and 6th. Although not as big a meet as the Asian Games the results show a lot of Asia’s best athletes participated here. The team between then broke or set 6 National Indoor records

Looking at the results if Filipina sprinter Princess Joy Griffey had been sent with the other three, based on her best time this year of 7.58 she would have finished fifth if she had run to her personal best (7.47 from 2010) she would have hit bronze medal.

Ruiz and others in action previous weeks

Meanwhile another Fil-Heritage athlete Tyler Ruiz high jumped 2.08m on his third attempt at the Don Kirby Elite at Alberquerque New Mexico. Ruiz was fourth at the SEA Games. Ruiz had 3 fails at 2.13m. Ruiz’s best is 2.17m.

Fil-Heritage High Jumper Tyler Ruiz who has a PB of 2.17m opened with 2.09m at a meet in Naperville 25.01.14. Ruiz who acquired his dual citizenship before the SEA Games finished 4th in 2.09m. He will need to leap 2.17m+ again to claim the National Record which currently belongs to National Coach Sean Guevarra.

Ernest John Obiena leaped 4.90m in Singapore open, the presence of competition helped Sean Lim of Singapore to a new Singapore national record of 4.90m, from his previous best of 4.83m. Obiena leaped 4.80m in Singapore a few weeks ago 19-year-old EJ is aiming for the 5.05m standard to qualify for world juniors he finished 4th at the SEA Games also against much more experienced vaulters. Obiena holds the junior record at 4.95m, to get the qualification for the world juniors he would have to bypass the national record of former olympian and Fil Heritage vaulter Ed Lasquette.

The #2 Filipina Pole Vaulter Alyana Nicolas was only able to manage a 3.10m vault at the Coast Conference classic 14.02.14 well off her best of 3.47m.

At the Simplot games, Kyla Richardson clocked a Filipina season leading 25.31 indoors in the 200m (worth around 24.8 outdoors).

Filipino American Vaulter Paris Pijuan became the latest Fil-Heritage athlete to acquire a Filipino Passport. Pijuan was born in 1996 and is coached by Estelle Naito, formally coached by Brooks Morris. Pijuan is the son of a former PBA player he has a personal best of 4.80m.

Pijuan who acquired the passport on January 16, 2014 is now eligible for any national junior records, indoor and national records from this date onwards and also dating back to January 1 of 2014 is eligible for his performances to be submitted on the Filipino Ranking list. Pijuan opening leap this year was 4.52m on 17.02.14 at Fresno.

The National Junior Record is held by Ernest John Obiena at 4.95m. Both Obiena and Pijuan need to leap 5.05m to qualify for the World Juniors this July in Oregon, US.

No other results reported this weekend athletes such as Cray were having a rest week.