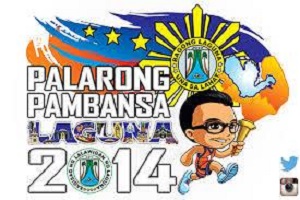 Palarong Pambansa 2014 will take place in Santa Cruz, Laguna, from May 4-10. The Palaro is the National High School Championships of the Philippines. And is an annual multi-sports event. At the same time, we are waiting for the release of the schedule. We will provide a review of the events of the athletes participating. The analysis will be based on the results of meets these last 12 months. The Palaro will serve as part of the ASEAN School Games selection process, held at Marikina at the end of 2014.

Leading the charge for the Palarong Pambansa 2014 Title is Western Visayas 17-year-old Mary Anthony Diesto (12.4); Diesto has made the final several years in a row in this event.

Yet failed to medal she did, however, win the Triple Jump at the last Palaro and the 100m Youth Title at the National Games. Perhaps her last year in the Palaro will end the hunt for the elusive gold in the coveted century dash. Diesto represented the Philippines at the ASEAN Schools and Youth Olympic Games meeting last year.

Her main challenge will come from 15-year-old Karen Janario of Leyte (12.5), the Batang Pinoy champion (100,200, 100 Hurdles). Also in the race is Calabarzon’s Ana Marie Querre, who, even though just having registered 12.9 in 2014, is last year’s Bronze Medals. Querre is currently ranked 9th on entries. Of last year’s finalists, Querre (3rd), Guro (5th), Diesto (6th), and Creer (7th) will line up again with the other four now at college.

Janario also starts as the favorite in the 200 (25.7). Slightly ahead of Elrica Jane Guro of Iloilo (25.8) and 14-year-old Joycie Beronio of Bacolod (26.0). Quierre, who was third in this event, will need a significant improvement on her 26.7 last year to feature in the medals again. Also, in the finals from last year, Creer, Ruby Ann Garcia, and Beronio placed last.

While in the 400m middle distance runner Louielyn Pamatian (59.0) has had some success over the quarter-mile alongside WV Teammate Angelica De Josef (1.00.1); also in the mix will be National Youth Champion from Leyte Leah Joan Creer (1.00.08). Also, add 14-year-old WV Joycie Beronio (1.00.2), the Batang Pinoy Champion, into the mix.

Pamatian and Creer finished 6th and 7th in the final last year. And Ruby Ann Garcia of NCR, who ranked 4th last year in 1:00.2, will also be in the race.

In the Men’s 100m NCAA High School Record Holder, Jomar Udtohan of San Sebastian (NCR team) is expected to be unchallenged. Most noteworthy is the 18-year-old who had made the Junior Final at the prestigious Thailand Open. Udtohan clocked 10.88, and 22.05 and is ranked #3 and #2 on the senior ranking lists this year.

He is expected to tidy up the Palaro Records, which stand at 10.9 and 22.2. The 100m Record is shared by Julio Bayaban, Ronald Calaunan, Emmanuel De Ocampo, and Daniel Noval. On hand-timed conversion, Udtohan has run around 10.4-10.6.

Udtohan won the National Youth title at the PNG last year in 100m. And is expected to add the National Junior titles to his resume the week after the Palaro.

While his next best opponent Cotobato’s Gino Dogoldogol is a very distant second with 11.0ht. Hence Udtohan placed third in the final of this event last year.

In the 200m, the record is shared by Calaunan and Noval. While On hand-timed conversion, Udtohan has run 21.6-21.8. Dogoldogol 22.7 and Mark John Balajeboco of Western Visayas 22.8 are more than a second behind.

The 400m is expected to be dominated by UP High schools Jaime Mejia in the NCR Team. 17-year-old Mejia shattered his own UAAP High school Record with a blitzing run of 49.46. Also, he has international experience, having run in the ASEAN Youth and Thailand Open. He ranked 10th against the Seniors last year in this event.

Expected to offer a good challenge is General Santos John Kenneth Nodos, who has registered 49.6 at the Regional Palaro. Patrick Morando of NCR 50.3,  Sanny Dalagumbyan (50.5), Jay Patrick Niels (50.6). And Balajeboco (50.7) all of Western Visayas will be battling it out for the Bronze.

Western Visayas Louielyn Pamatian tops the 800 this year with a time of 2:17.5. Ranked 4th in the seniors this year. Her nearest rival is teammate Angelica De Josef of Aklan (2:17.2 in 2013), the Batang Pinoy Champion. Last year De Josef won the Palaro, and Pamatian finished runner-up.

Perhaps the athlete who can stop a clean sweep of the Western Visayas in this event is Jie Ann Calis of Northern Mindanao, who ran 4:48.2 last year to finish second behind Gagnao. While Pamatian is the season leader, Gagnao, De Josef, and Sustiedo make this an interesting 5-way fight.

(due to insufficient data, no write up available, unlike the girls, none of the boys qualify for the senior ranking lists)

An outright favorite in the Women’s Hurdles is Yolanda survivor Karen Janario of Leyte. The 14-year-old is the Batang Pinoy and National Youth Champion in this event. Janario has a personal best of 15.43 from the National Games, which is the fastest ever time by a Filipina her age. Her teammate Melissa Escoton, a 15.85 bronze medalist in the youth division at the National Games, and WV Champion Ezel Divingracia of Western Visayas 16.0 are expected to fill the minor medals.

Meanwhile, in the Men’s 100 and 400 Hurdles, the favorite is UAAP High school Record Holder Jaime Mejia of NCR. The 16-year-old has best times of 14.6/14.89et and 54.1. He is expected to face an extreme challenge from Alexis Soqueno of Bacolod, the Batang Pinoy Champion, who has a faster performance of 14.77et.  Also strong in this event will be Alvin Vergel of NCR 14.8.

While in the 400 Hurdles, Mejia is comfortably clear of Soqueno, who holds the next best time of 56.7.

Again WV Mary Anthony Diesto, who was last year’s Triple Jump Champion both at the Palaro and in the PNG youth division, will start as favorites. Diesto has not beaten her personal best of 11.61m for a year. I will be looking to add the sprint title to her jump titles.

The former Taytung student is now studying at Negros Public School. This year Diesto’s best leap has been 11.35m. The Palaro Record is held by another Bacolod Athlete, Felyn Sausa Dolloso, who leaped 12.35m back in 2010.

Dolloso went on to break the National Junior Record with 12.55m at the 2012 National Games. The primary opponent will be Jessa, Mayor of CAVRAA, second at the Palaro last year with 11.31m.

Diesto also leads the long jump with 5.36m. Despite finishing third in the Palaro last year. Defending Palaro Champion Jessa Mayor (5.30m) will be the primary opponent. Bacolod’s Romerose Villanueva (5.18m), the Batang Pinoy Champion, will be in action.

“I am very serious this year’s WVRAA, I really prepared hard in this event with the big reason that this is my last year to compete,” remarked by Diesto.

The slight favorite in the high jump is Kaylene Mosqueda (Western Visayas), who has the best leap of 1.54m. With the close behind likely to be a battle between NCR Eloiza Ituriaga. And The Batang Pinoy Champion Leah Taltala has leaped 1.53m.

15-year-old Batang Pinoy Champion Jose Jerry Belibestre of WV leads the lineup with the best leap of 6.87m. Belibestre has been registering 7.00m jumps in training. He recently won the Palaro WV leg in 6.77m.  Belibestre is also expected to do well in the Triple Jump.

His teammate Alexis Soqueno, 15, is a very promising find in the Boy’s High Jump, having leaped 1.95m during the Bacolod Weekly Relays. It is the best performance ever by a Filipino athlete for his age. Soqueno had been consistently winning the Batang Pinoy in 1.90m and Western Visayas Regionals in 1.90m. Soqueno is not only the teammate of Belibestre but also his schoolmate at Romanito Maravilla high school.

Miguel and Addy Arca coach the two boys. The tiny school of Romanito Maravilla has only 400 students. It has produced 6 national champions in athletics alone in Batang Pinoy, Palarong Pambansa. And National Games youth categories in the short span of 2 years.

17-year-old Dianne De Jesus of Pampanga, the defending Palaro Champion in the Shotput. She goes in with the challenging task of defending her title. With the emergence of Calabarzon’s Jewel Manaig from Tanuan City. Manaig, the Batang Pinoy Champion, leads the starters in the Women’s Shotput.

Jeremay Rubias, the Defending Palaro Champion, improved her throw from 39.59m to 40.15m at the Western Visayas Palaro. And goes in favorite to defend her title. Also highly favored is the rapidly improving Monica Andaya, the daughter of Veteran Coach Rosito Andaya, who represented NCR and won the Batang Pinoy title in 38.42m.

In the Discus Riva Carlo, the Batang Pinoy Champion 32.02m goes in as the slight favorite in this event.

While in the Men’s Javelin, Bryan Pacheco (58m) is the SEA Youth Bronze medalist. Will face the challenge of newcomer  Ronald Lacson who threw 56.85m at the WV Palaro, and will be one to watch for.