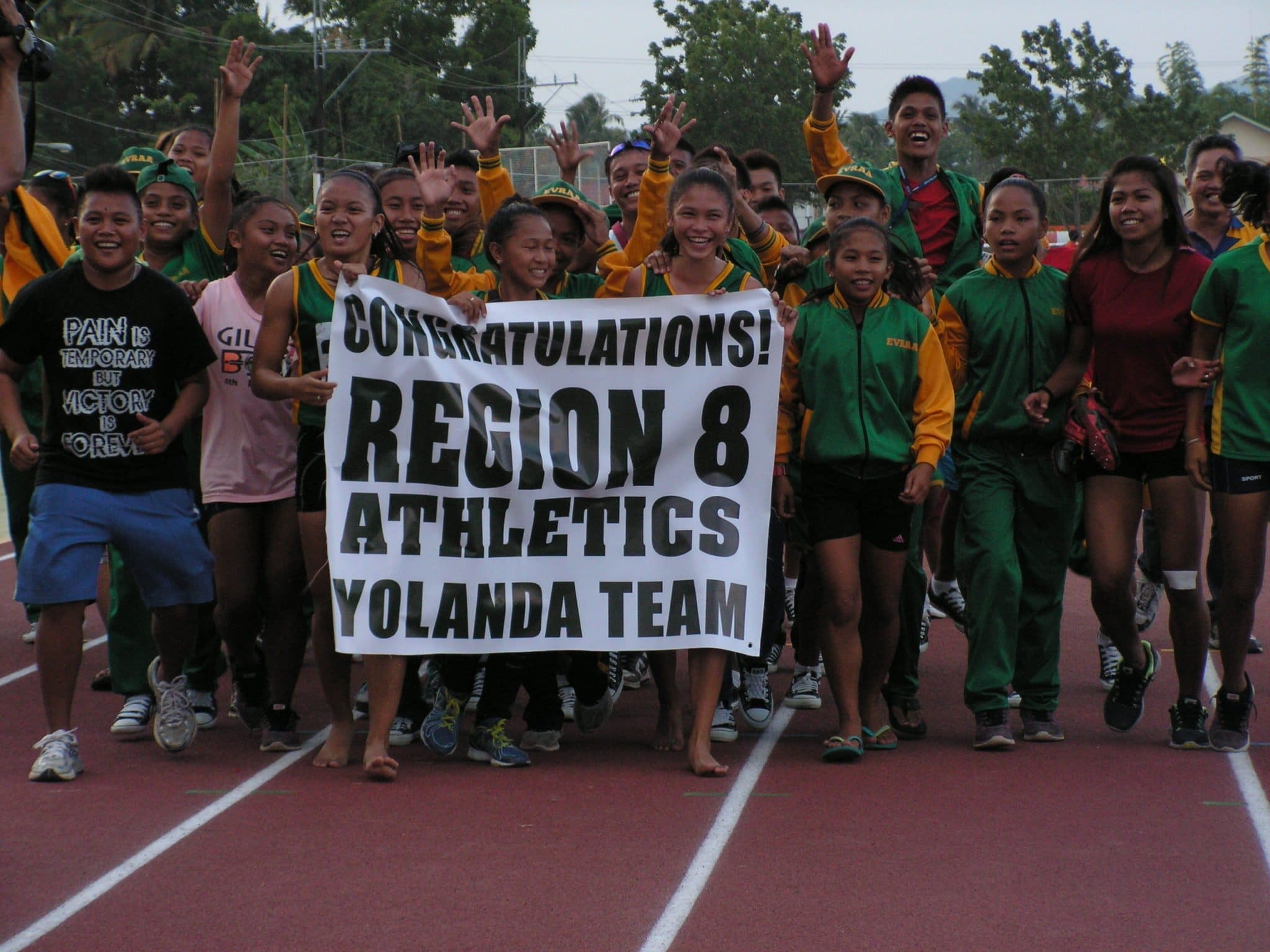 May 9, 2014
Photos and text by Airnel T. Abarra for Pinoyathletics.info

SANTA CRUZ, LAGUNA- “What doesn’t kill you makes you stronger”*. This could be true when the Eastern Visayas Region Athletic Association (EVRAA) Athletics team secondary girls victory in 4x400m relays during the last day of the Athletics tournament at the 2014 Palarong Pambansa here at Laguna Sports Complex, Brgy. Bubukal Sta. Cruz, Laguna on 09-May.

Calling themselves “Team Yolanda,” EVRAA trackers overpowered their powerhouse rivals, in spite that their home region was greatly affected by typhoon Yolanda (Haiyan), which significantly damaged their training facilities. 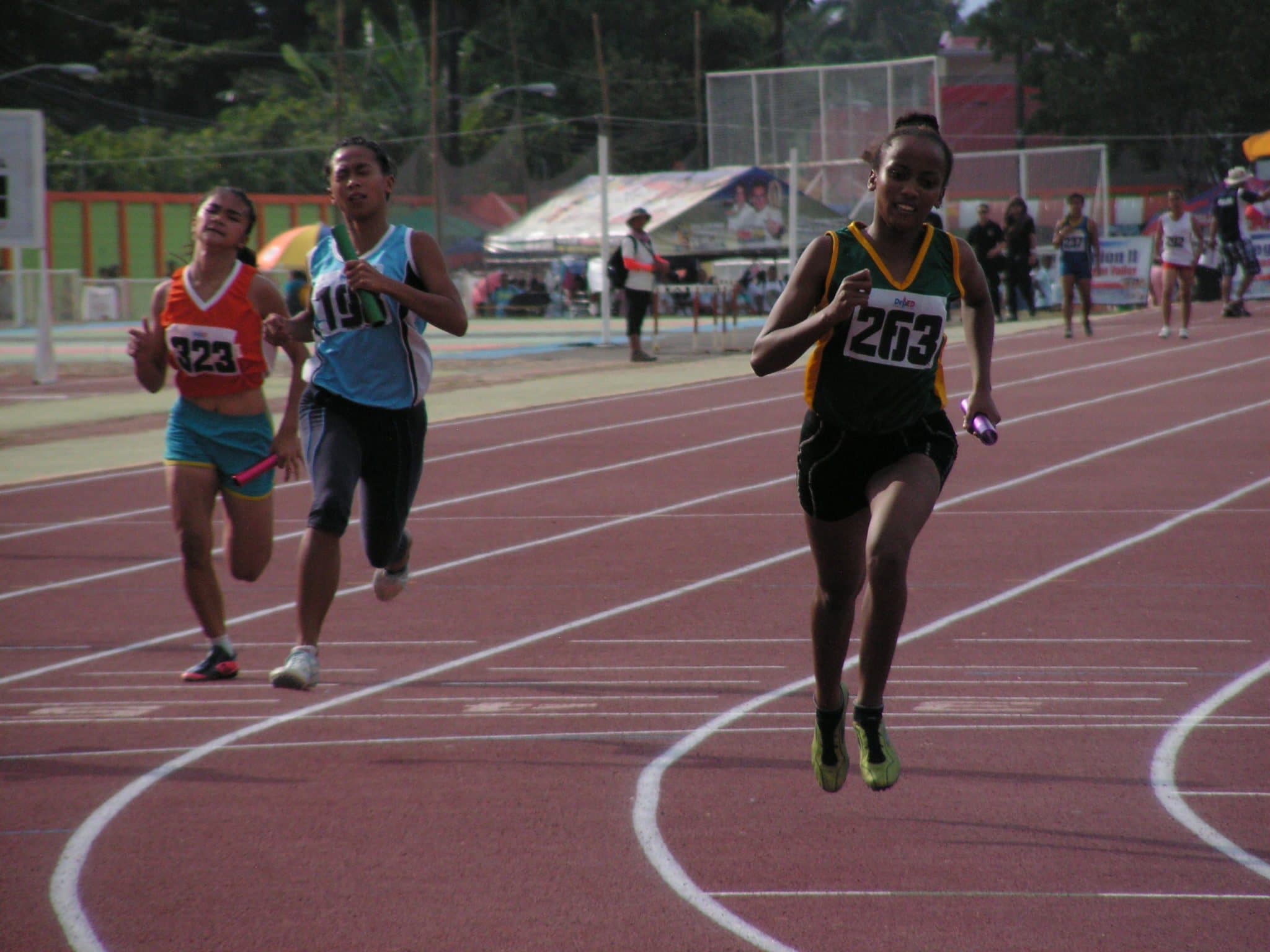 “First championship since 1948” according to their head trainer and coach, Alfonso “Trece” Academia, the Eastern Visayas team finally end its athletics medal drought and harvested victories in this years’ Palaro.

Leah Joan Creer, Karen Janario, Faiza Jean Lenton, and Gemmalyn Pino sustained their pace during the race and lanced their powerhouse rivals from CALABARZON and Western Visayas, and clocked a crystal precise performance of 4:04.0 minutes. While on the 4x100m, the Western Visayas Region got the gold as the tournament officials gave EVRAA DQ a decision.

Creer and Janario, who clocked an identical finish of 25.8 seconds, beat the limitations of storm-destroyed training facilities and managed to outlast their event rivals. Creer, who already captured first place in the 400m dash, had already 2 golds on her neck while the robust 15-year old Janario; also the 2013 Batang Pinoy champion in Hurdles, is feasting to a total of three medals (2 Bronze and 1 Silver) as of press time.

Meanwhile, on the elementary distaff side, Karyll Clarissa Enrico of CALABARZON captured gold with a time of 27.2 seconds, while SOCKSARGEN’s Tresha Mae Arevalo clocked 23.3 seconds, catching the silver medal, and Enrico’s comrade Imary Ruth Samano (CALABARZON) sneaked out the bronze with a time of 27.4 Seconds.

17-year-old Jomar Udtohan running for NCR did a fantastic job tidying up all three of the sprint records at the Palarong Pambansa. Gando coaches Udtohan at San Sebastian College. The young Udtohan cruised through the heats in 11 flats in the 100m before destroying a field comprised of the best high schoolers the country had to offer in the Men’s 100m Final.

Pushing out hard at the start, Udtohan made up 2m on the whole field after just 50m into the race. Udtohan, who was more muscle-bound than his opponents, who stand 5’5, unleashed a devastating second race portion, which saw him surge another 3m on the field to win by 6 strides over Bautista.

Daniel Noval from Cebu is the current 100m Junior Record Holder which he established 10.65et in 2012. (after checking the official results from previous years, the palaro records seem to overlook several of these former record-holders).

Surprisingly this was not Udtohan’s best effort as he had run an electronically timed 10.88 to break the NCAA Record (the equivalent of 10.6 hand-timed).

Nevertheless, Jomar Udtohan palaro records didn’t waste any time going under the Palaro Record in the heats of 200m with a time of 22.0. In the final Udtohan. The last will be tomorrow.

After clocking the fastest time in the heats of 50.3, Jomar Udtohan Palaro Records again with a run of 48.9; the former record was held by Rodrigo Tanuan (who was 21 years old? at the time 49.5).

Udtohan has now tidied up all three of the records. His win was at the expense of teammate Jaime Mejia who was the favorite to win this event and had presented better ability over the 400m the last few years. 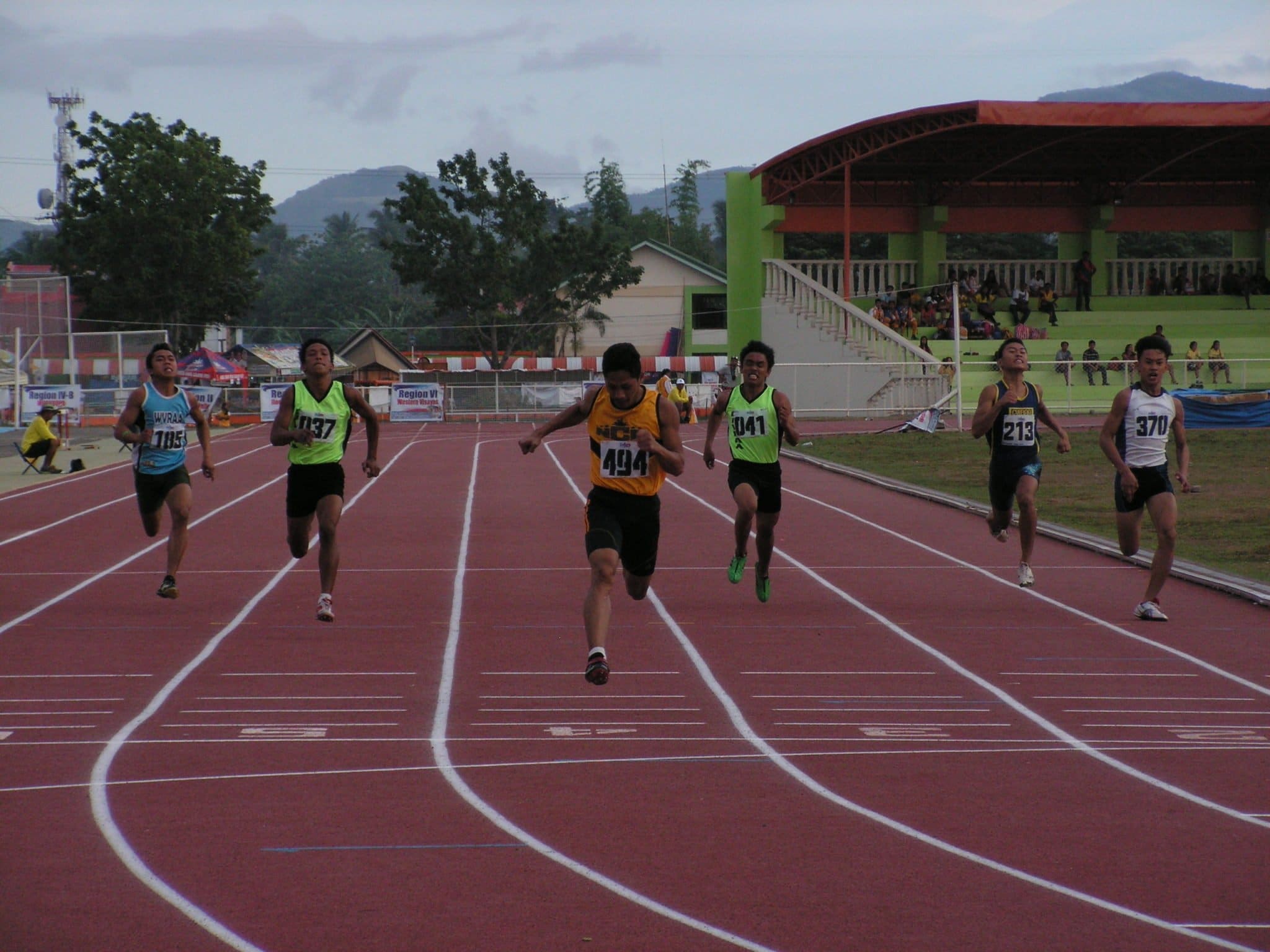 Udtohan in his final stretch in 200m crafting grand slam in Palaro sprints.

SANTA CRUZ, LAGUNA- National Capital Region (NCR) athlete Jomar Udtohan did a record sweep in sprints. He captured his third gold in the 200m dash secondary boys during the day six Athletics tournament of the 2014 Palarong Pambansa here at the Laguna Sports Complex, Brgy. Bubukal Sta. Cruz, Laguna on 09-May.

The capital city fast man added another medal in his neck by crafting a stellar performance in 200m by clocking 21.8 seconds, which pulverized the 16-year record of Ronald Caluanan of CAVRAA set in 1998. The San Sebastian College prodigy previously smashed Palaro records in 100m at 10.8 seconds and 48.7 seconds, which garnered him triple golds. 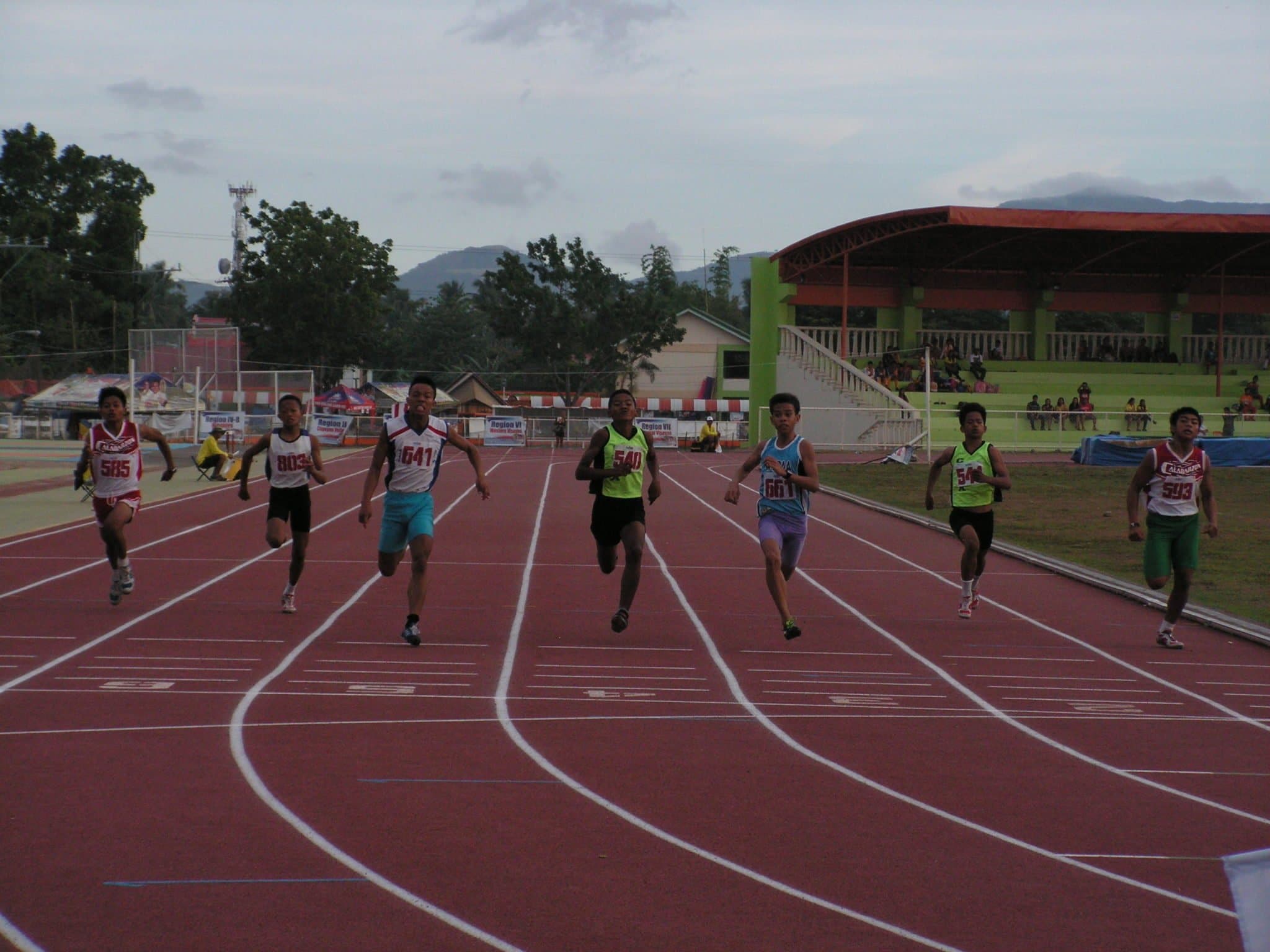 Edwin Requillas III of Bicol Region snatched another gold to reign in the century dash. By running at 25.3 seconds at the elementary level. Making this his second gold in this year’s palaro. Following him is Lynch Mananquil of WVRAA, which clocked 25.4 seconds. And settling for bronze is Nickson Maramag of Cagayan Valley with a time of 25.6 seconds.