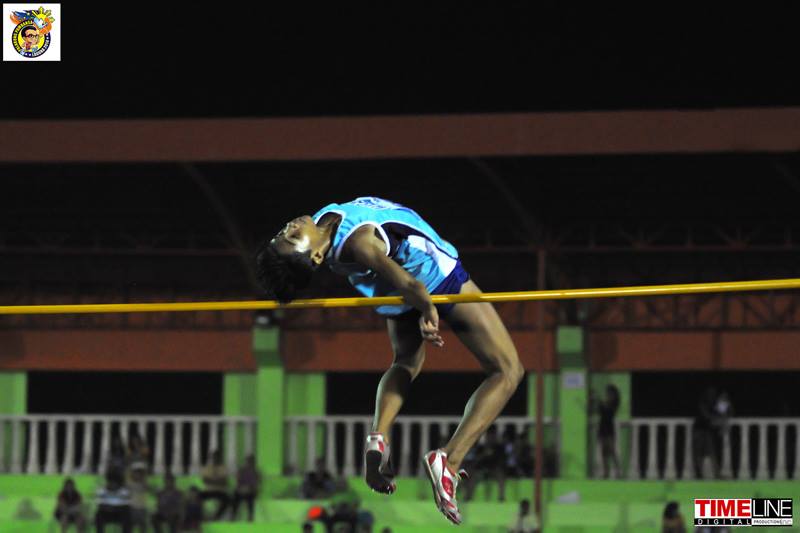 SANTA CRUZ, LAGUNA- Leah Joan Creer of Palo, Leyte reigns supreme in the 400m dash during the day five Athletics tournament at the 2014 Palarong Pambansa here at Laguna Sports Complex, Brgy. Bubukal Sta. Cruz, Laguna on 08-May. The Leytena sprinter snatched her first Athletics gold and added another one for her region’s medal haul.

Creer, the silver medalist in the century dash on 07-May, focused under pressure and winning form and clocked 59.3 seconds despite training hardships as she came from the Typhoon Yolanda-devastated province.

As her home turf, Leyte Sports Complex in Tacloban City was damaged, it didn’t affect her as well as her teammates. Creer and her teammates performed well under the mentorship of Coach Trece Academia. Creer, who just finished high school, plans to study at De La Salle University-Manila and her 100m dash princess Mary Anthony Diesto next year.

Meanwhile, on the elementary distaff side, Monic Grace Gulac of SOCKSARGEN Region stunned her rivals. She did a strong finish in 400m elementary girls hitting the finish with a time of 1:01.9 minutes. The Sinolon, South Cotabato stand-out added another gold for her region, which is also a candidate host for 2015 Palaro.

Alexis Soqueno registered a leap of 1.93m to break the Palaro Record of Paolo Martinez (STCAA) from 2002, which had stood at 1.90m. The first palaro title for the Western Visayas athlete is schoolmates with Palaro Long Jump Champion Jerry Belibestre 7.08m. The boys attend the tiny school of Romansita Maravilla in Bacolod, which has produced six champions from Batang Pinoy, Palaro, and PNG Youth Division in the last three years.

The duo is trained by brother-sister team Miguel Arca and Addy Arca.

Soqueno has had a very consistent season registering his personal best of 1.95m at the weekly relays in Bacolod, winning the Batang Pinoy title in Bacolod in 1.93m, winning the Western Visayas in Antique in 1.91m, and then adding the Palaro Record to his resume.

Soqueno’s performances were good enough for him to win the Gold at the ASEAN Youth Games, which was the last time he succeeded in 1.90m had he been sent.

The 16-year-old will next compete at the National Games in Manila, where he will be the hot favorite to win the Junior High Jump title; undoubtedly, his performance also will guarantee his selection for the ASEAN Schools at the end of the year in Manila. At the same time, a version of 2.00m is required to qualify for Asian Juniors.