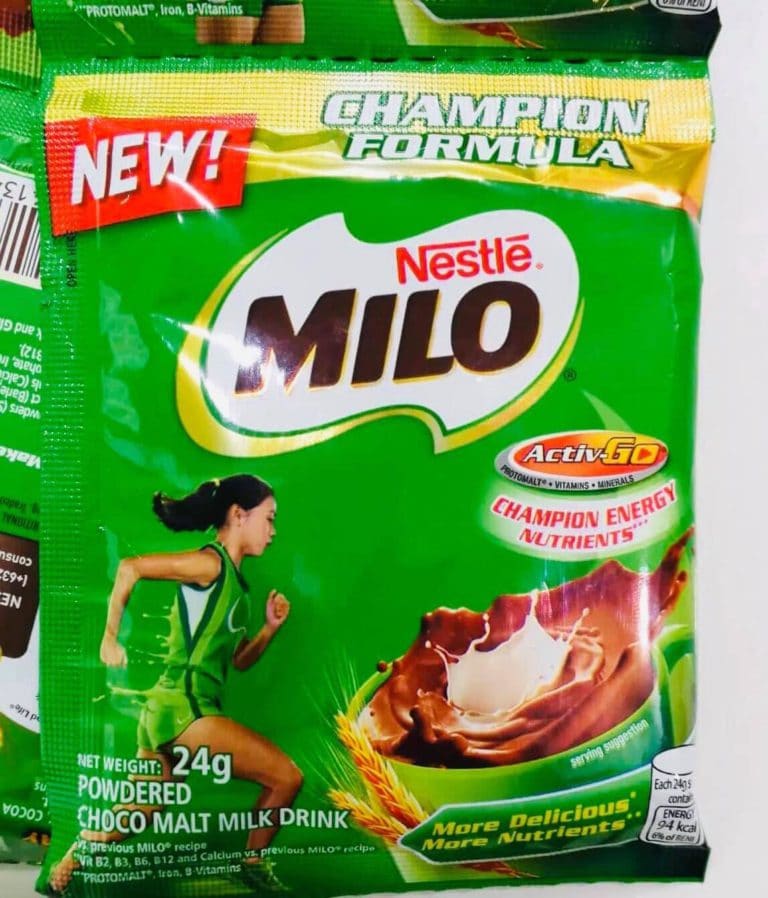 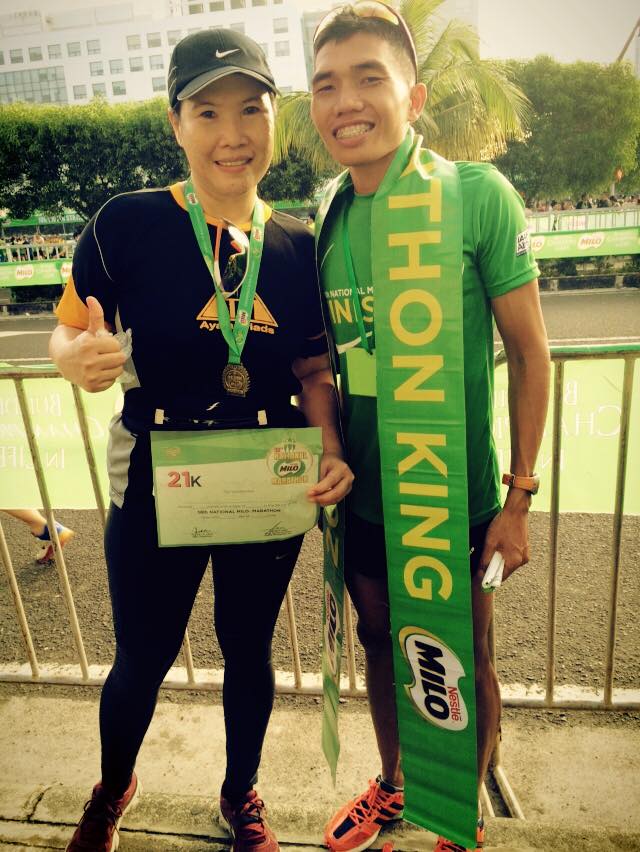 After years of hardship, Rafael Poliquit of the Philippine Airforce. Also known as ‘Master Endurance,’ finally won the Milo Marathon crown in 2014. The 25-year-old is a UAAP Standout for FEU. And former national champion over 5000 and 10000m bested some of the sport’s legends. Poliquit won in a personal best time of 2:32.29. Finishing fourth behind three Kenyans who all registered 2:21 but were the first Filipino athlete home.

The Womens Division saw a battle of four former Milo Marathon Queens. However, last year’s champion Mary Joy Tabal, 25 of Cebu, dusted off the field with a win in 2:51.55, which was well ahead of her nearest pursuer.

Former multiple Milo women’s champions. Double SEA Games champion and National Record Holder Christabel Martes (Baguio), 34, a mother of one. Made a remarkable comeback to improve this year to second place with a time of 3:03.49. She held off the 2011-2012 Milo Champion/ National 10,000m Champion and PATAFA training pool member Mary Grace Delos Santos (Airforce), 27. Who clocked 3:05.34 for third place.

Jhoann Banayag (Army), 32, a former SEA Games champion, multiple milo champion, and mother of one made a return this year to finish fourth in 3.07.59. Following closely behind was national triathlete Miscelle Gilbuena (Airforce). And Criselyn Jaro (Airforce) one of the three famous Jaro sisters. 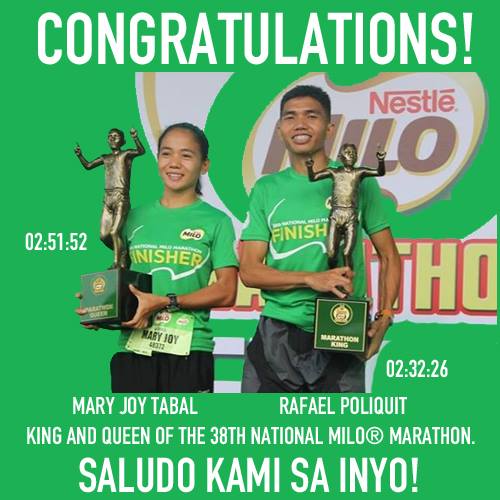 The Women’s selection is fairly cut and dry for the 2015 SEA Games. As the qualifying period is from December 2013 to March 2015. Only one athlete has run below the 2h49.01 bronze standard of the 2013 SEA Games. Mary Joy Tabal clocked 2h48.00 during the 2013 Milo Marathon in December. Which is the fastest ever time recorded for that course. Even though at the Milo Marathon, she was only able to clock 2h51.55. She was still undefeated by locals. And the delay in scheduling the race by one week would have affected her performance.

As there are now only six months to go before the next SEA Games. There is not ample time for another Marathon to be run as two Marathons a year is usually the maximum. Any further attempts to qualify may lead to exhaustion for the SEA Games Marathon, scheduled on June 7.

The two other place-getters at the Milo Marathon still have a good chance to qualify in the National Open on March 19-22 in the 10,000m event. Mary Grace Delos Santos was only 6 seconds outside the standard at the Philippine National Games last May.

While the Women’s is cut and dry on selection for the 2015 SEA Games. The men’s is a bit more complicated. Only two athletes have gone under the Bronze standard for the SEA Games in the qualification period.

Eduardo Buenavista 2013 Milo Marathon in December registered 2.27.14. Bertek’s time was faster than the winner of the last SEA Games, Mok Yin Reng of Singapore, who timed 2:28.36.  While Eric Panique, who clocked 2.30.30 at the last SEA Games to win the bronze, has medalled at the last two SEA Games.

While Poliquit has defeated both the SEA Qualifiers, his time of 2:32.29 is outside the SEA Standard of 2.30.30 by nearly two minutes.

Poliquit, who was removed from the training pool after finishing fifth behind four non-national athletes at the national games, should strongly be considered for reinstatement. He should also be commended for the win over two SEA Games veterans.

However, it would be up to the selectors’ discretion and the task force whether to include him in the SEA Games. As if one athlete who has not made the bronze medal standard is allowed. It may cause other non-medal standard athletes also to appeal and then put inconsistency in the selection methodology. If other factors are to be considered, then it’s worth an appeal, other factors such as the athlete’s age, the course type, and his newness to the event.

Milo Marathon Eliminations: Erinio is King of the Raq!

He has the best time of 2 hours 30.21 from last year’s eliminations where he narrowly lost to Eric Panique, the 2013 SEA Games bronze medalist in this event.

Raquin was very close to getting the second spot in the 2013 SEA Games but was removed in the last round of cuts by the PSC-POC task force last year. The second was Davao’s Jeson Agravanate (2h38.36), ahead of last year’s 5000 and 10000m National Champion Rafael Poliquit (2h44.15).

The womens side was won by multiple former Milo Marathon winners and National Games 10000m Champion Mary Grace Delos-Santos (3h08.15), who needs a time of 2h49.01 to qualify for the SEA Games. Like Raquin, Delos-Santos was also removed from the last round of selections for the SEA Games by the task force. Jennelyn Nobleza (3h17.43) and Aileen Tolentino (3h33.04) completed the top three.

Almost 13,000 runners joined this leg, and 39 qualified for the National Finals.

Buenavista and Dela Torre were awarded a cash prize of P10,000, a trophy, and a  spot in the National Finals on Dec. 7. MILO will be sending this season’s MILO Marathon King and Queen to compete alongside elite runners from across the globe in the 2015 Tokyo Marathon.

The two-time Olympian and three-time SEA Games gold medalist Buenavista persevered through the hot and dry weather conditions and pushed on to claim another sweet victory.

“The weather today was challenging. I’m used to the cold weather in Baguio, where I train with the national team. Thankfully there are adequate water stations throughout the race to help us cool down,” shared the athlete fondly called Vertek by his friends.

The 35-year-old native of South Cotabato is a sergeant of the Philippine Air Force and a member of the Philippine National Team. “I am focused on my training, and my target is to win in the finals. Because of MILO, I was able to experience running in the 2014 Paris Marathon. I would like to defend my crown as MILO Marathon King and run in the Tokyo Marathon next year.”

25-year-old Rafael Poliquit was the surprise winner of the National 5k and 10k titles beating the legendary Eduardo Buenavista in blanket finishes at last year’s National Games in Manila. Poliquit, who missed out on a slot to the SEA Games, then was dealt a defeat by Richard Salano of UE in the 5k and the 10k at the UAAP.

The Master, who recently was able to beat 3K Steeple Chase Champion Christopher Ulboc in a 5k run, continued to show fine form leading up to PNG with a win at the Del Run organized by Rio Dela Cruz in Marikina, winning a race just over 10k on Road in 33.06 minutes, this time he held off NCAA Newcomer Immuel Camino of Arellano who was runner up in the 1500,3k steeples and 5k during that event (Camino has the best time of 15.08 which is better than Poliquit PB) and Salano. The race started in the oval and then went out onto the road and then back into the oval.

Poliquit, who is coached by 2001 SEA Games Marathon Champion Roy Vence. Wants to show he is earnest about defending his 10k title at the National Games. And his win last year was not just some one-hit-wonder. It will be a strong field with Poliquit expected to go head to head. With National Record Holder and multiple SEA Games gold medalist Buenavista, former multiple sea games medalist Julius Sermona, UAAP Champion Salano, and SEA Games 2013 Marathon Bronze Medalist Eric Panique, among others in what will be a strong field.

While Poliquit’s best time of 32.02.49 to win the National title pails in comparison to his older opponents’ best times, he had the fastest time last year in the 5k and 10k. Poliquit hopes he can lower his best performance at this coming PNG.