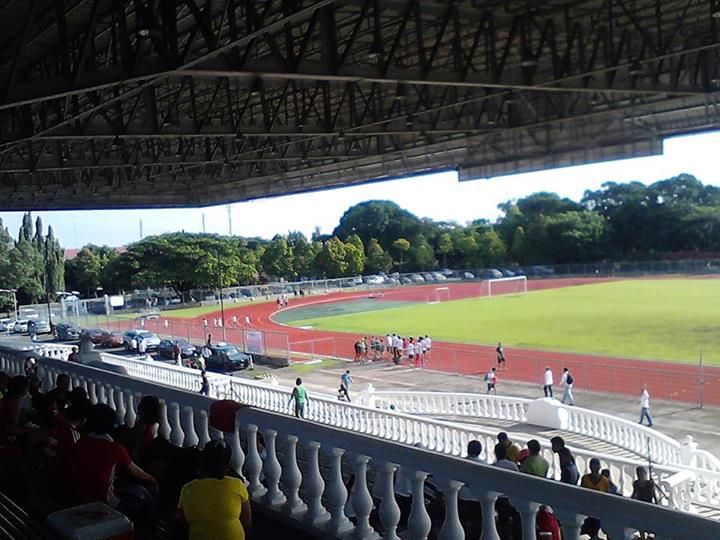 This is a complete set of results of all the Weekly Relays held at Dasmarinas in 2013. I want to thank Ms. Tyne Artiaga the official encoder of PATAFA for compiling these results from the handwritten results taken by the PATAFA officials.

It includes amendments and corrections in result keeping. Please report any further anomalies in the result by commenting on this article. I have requested the final results and they should be available soon.

The 2013 Weekly Relays will start on August 24 at DLSU Dasmarinas. Attached is the program that PATAFA kindly supplied.  Pole Vault is not available at the meeting.

The use of electronic equipment which would allow qualifying performances for international meets, National and National Junior records to be made official has also been requested.

The First leg of the Weekly Relay Started at the newly relaid track oval at DLSUDasmarinas on Aug 24. At the same time, this is looking to be the key venue for the Weekly Relays. Hence the next leg will be held on August 31. Also please see the previous article for a full schedule of the events.

Also, I would first like to thank and commend the hard work and effort of PATAFA organizer Joey Santos. Who had a hectic last 24 hours? Also, he needed to collect the Richardson Family at midnight. Hence Joey went to the airport as their scheduled flight from China was delayed 2 hours.

While Joey did a good job today helping coordinate the officials along with Marlon. Yet the officials present were accommodating, and considerate and conducted the meeting well.  Hence, Joey cares about the sport and is fundamental in developing our sports program.

Also the staff there were very receptive to feedback from the community. Hence, all in all, it was a very good meet. I have been running for 16 years. While It was one of the best meets I have ever participated in this country.

While The track oval was perfect as well, also, it was very comfortable to run on, and this means athletes would be less prone to injuries. It is currently the best surface in the country right now.

Yet about 80 athletes turned up from DLSU Dasma, University of the Philippines, FEU, St Francis of Assisi, Bulacan State University, and Arellano among times in the women’s both with 12.9. These times were however too slow to be ranked on the NATIONAL RANKING LISTS (the minimal requirement is 12.68et or 12.4ht).

Also, Clinton Kingsley Bautista (FEU) 4th at the National Games, was the fastest in the Men’s 100m winning Heat 1 in 10.8 (ranked).

The PSC/PATAFA are considering the following

Moving the Starting Blocks to Dasma from Ultra for the next leg on Aug 31.

Also, we need to continue supporting the BREAD AND BUTTER of the development of our domestic season in the Philippines Track and Field. Entry is FREE. While we have a range of different events for varying abilities. Hence please email [email protected] for more details.

While this week the weekly relay continues on Aug 31. Hence it’s time to RELAY IT UP AGAIN!  and FEEL THE ROAR! of the Weekly Relays Serie.

While this Sunday the weekly relay will be scheduled on Sunday the 15th of September. Yet we are requesting electronics from the PSC and will follow up on that as well as the high jump mat. While the starting blocks complete set is now available.

Yet please note the Pole Vault events were held on 14.09.2013 at Ateneo Campus, Track Oval in Manila. And this meeting was also attended by PATAFA officials hence the results were validated by the IAAF.

Also, we will tally up the points in a further report due to time constraints. Also, the best result was again a new national Junior Record by Ernest John Obiena.

While 18-year-old EJ Obiena strengthened his bid for the SEA Games qualification with a mark of 4.95m Obiena who has taken the Junior Record this year from 4.50m to 4.95m now ranks 3rd in South East Asia behind Kreetha of Thailand the defending SEA Games Champion 5.15m and Iskandar Alwi of Malaysia 5.01m.

Obiena also equaled the personal best of his father and coach Emerson Obiena (the #2 Filipino of all time and won several silver medals at the SEA Games in this event).

Obiena had a near miss just skimming the bar at an attempt of 5.01m. The 6’2 Obiena has had an impressive season with meets in National Games Vietnam, Singapore, Korea, Taipei, Hong Kong, and Thailand. Obiena is hoping to next compete at the Asian School Games in Malaysia but is currently looking for sponsors to help with the trip.

The meet which was conducted by PATAFA officials with the assistance of the Philippines Pole Vault Club and Ateneo University was certified by the IAAF which now means that EJ 4.95 is a new junior national record. Ateneo’s brand-new varsity oval hosted the meet.PV Mens: 1. EJ Obiena (95) 4.95 (NJR)

The Fourth week of the weekly relays saw the 2nd edition of Schedule A.

The meet was not as well orchestrated as the previous editions with the Steeplechase being set up when the race was in progress (athletes just 5m away from the steeplechase) and the maintenance leaving it to the last minute to put out the starting blocks and then unable to find the blocks and making little effort to find the blocks. (Blocks were later located in a locked room under the stands but were not used in this meet). The weather saw heavy rain as well.

On the plus side, however, the meet continued to grow with 114 entries in the Youth Boys 100m or 16 heats! and around 600+ athletes in total.

Several errors in encoding including the women’s 100m, men’s 100m, and men’s long jump have been corrected. I will be working on the overall point tally when I have time.

Please note that there are no wind gauge, hand times, starting blocks, and very wet rainy conditions. All hand times must be rounded up to the nearest 10th e.g. 10.91 to 11.0ht.

Highlights of this meeting included Palaro and National Junior Champion Jaime Mejia (UP) easily winning boys hurdles in 15.2. Robert Francisco (Dasma) setting a new PB 14.7. Mejia then went on to win the Men’s 400m in 49.9.

The FEU quartet of Ebcas, Clinton Bautista, Jhon Rhey Bhardos, and Isidro Del Prado won the men’s 4×100 in 42.1, from UP and ADMU.

FEU’s Josie Malacad and Christine Del Rio had the fastest times in the women’s in 26.2 with Del Rio. At the same time, Anfernee Lopena was fastest in men’s in 22.2.

Due to typhoon “Santi,” we are canceling the scheduled event Weekly Relays tomorrow (Oct. 12) at DLSU – Dasmariñas track oval. The said event will resume on Oct. 19 with Schedule A.

Please note again the Maintenance staff did not bother to put the blocks out again. So no blocks were used in the sprint events.

The lack of electronic timing also meant the best athletes tend to not go in the same heat, as sometimes limited timekeepers start and stop the watch in a close sprint race. It takes around .2 to .25 to start and stop a watch, so if the difference between two runners is only .05 the timekeeper misses the time and the other runner, unfortunately, gets a much slower.

On the plus side, the huge numbers attracted to this event make it a mass-based event rather than a quality competition for the elite.

The Highlight was the performance of the Collegiate team of Lyceum of Batangas featuring National Junior Champion Ryan Bigyan whose time of 3:20.7 which was the fastest time of the 2013 weekly relays you can watch the video here. (both videos supplied by Ryan Bigyan).

Former Training pool member Honey Joy Salaysay was the fastest in the 100m in 13.1 the 29-year-old Mother of three. Took advantage of the absence of most of the country’s best female sprinters to win this event.

The fastest female time, however, came from Judy Ann Rendora of Dasma in the Junior Women’s 100m in 12.8.

Former Filipina National sprinter 29-year-old Honey Joy Ortaliz-Salaysay had an epic comeback win at the weekly relay Finals on Saturday. The mother of three who participated in the 2003 and 2005 SEA Games, started running again this year after a six-year absence from the sport. These days Salaysay is coaching at Bulacan State University with her husband Philip who is the head coach.

This season the coach decided to lace up her spikes again to keep fit with her athletes. Ortaliz fought with the fact she was 20lbs over her running weight after having three children this season.

Not only did she keep fit but she beat her entire varsity women’s lineup. Salaysay who won UAAP titles for FEU in the 100m has a personal best of 11.6 hands (12.0et). And although she was still far away from these times this year she has shown good progress with 13.4, 13.2, 13.0, and then 12.6 during the weekly relays serie.

It was a victory of sorts as she was able to hold off 2012 Palaro and Uni Games Champion Maureen Emily Schrijvers, 19 from DLSU Taft.

While she is still for now behind her goal of remaking the women’s 4×100 yesterday sent a glimmer of hope and hopefully a message of inspiration to all our older athletes and also younger ones that women can still be competitive even after giving birth and even in the late 20s and early 30s. Older and more mature with a new focus Ortaliz is glad to be given a second chance at the sport she loved so dearly.

“Once you have the speed it never leaves you. It is just waiting for that right time to come back”

So we ask all our female sprinters who have hung up their spikes and are still Under 30. If Honey Joy can run make a comeback and be competitive after having three kids why can’t you?

To some of our younger female sprinters if someone who started 20lbs over their running weight and had the determination to train through it? what is your excuse for not attending training?