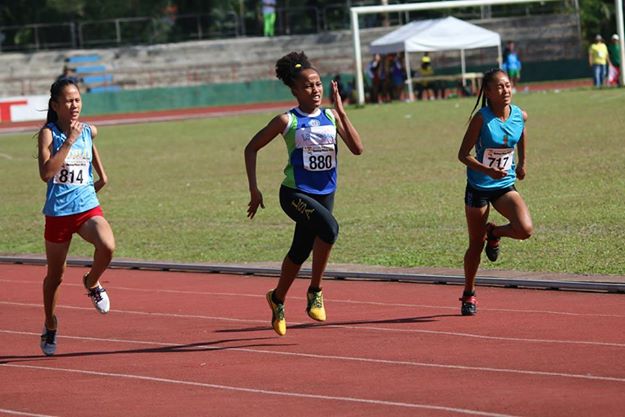 BATANG PINOY PRESS RELEASE
courtesy of Nonilon Reyes
2013 Batang Pinoy Finals
BACOLOD CITY — Alexis Soqueno of Negros Occidental snared the fourth of his target of five gold medal yesterday after topping the boys 400-meter hurdles yesterday in the POC-PSC Batang Pinoy national finals at Panaad Park and Stadium here.
Sporting a trendy windswept hairstyle, the reed-thin five-foot-8 lad from this city blazed the track in 56.8 seconds, beating Pangasinan’s Ludivico Dela Cruz Jr., and Negros Occidental teammate  Rodrigo Delaben who clocked 57.4 seconds and 57.6 seconds, respectively.
The third-year from Romanito Maravilla National High who has never won a gold medal in the past is now the toast of meet with four golds tucked in his belt including the boys high
jump, 110m hurdles, and the 4X100 relay with Delaben, Mark John Balajeboco, and Jose Jerry Belibestre.

“My goal is to win all five events I am competing,” said Soqueno who set a new record in high jump last Wednesday with a leap of 1.93 meters. He was to anchor his team in the 4X400 relay late yesterday. “It’s special for me because I am competing in front of my family and friends.”

But sharing the stage with him in the meet organized by the Philippine Sports Commission and Philippine Olympic Committee was Leyte Sports Academy’s Karen Janario who captured three golds Wednesday including her inspiring gold-medal performance in the centerpiece century dash which brought athletes and the crowd on their feet.
A survivor of Typhoon Yolanda which flattened their school in Tacloban City, Janario now has three golds under her name including 100m hurdles and 4X100 relay with Rosemarie Olorvida, Feiza Lenton, and Gemmalyn Fino.
Training at Rizal Memorial Sports Complex for two months after being rescued by the PSC along with 30 other LSA students, Janario also topped her heat in the 200m dash yesterday morning.
Bacolod City bet Maia Yusay delivered the first gold for the host after topping the girl’s mountain bike at the old airport track. Yusay timed 36 minutes, 50.34 seconds after two laps over the 12-kilometer route to beat Ana Patricia Maximo of Cebu (36:57.06) and sister Mikaela Paulina Yusay (43:14.66).
But Maximo got back at Maia when she ruled the road cycling with a time of 46:03.34 beating Maia (48:08.79) and Mikaela (50:18.20) who wound up second and third, respectively.
Brylle Cocjin topped the boy’s mountain bike ran over 24km and clocked 57:48.16 as Davao went for a 1-2 finish with Jayson Caceres placing second (1:02:00) and Bacolod’s Mio Andrew Barredo third (1:02:05).
Pangasinan scooped all the medals in the thrilling boy’s road cycling with Emmanuel Delos Santos capturing the gold (1:15:59.64), Malone Canlas Jr., silver (1:15:59.65), and Rayden Scott Evans bronze (1:15:59.67).
The host city also picked up gold in chess played at the New Government Center Masskara Hall through Stevenson Garong in boys rapid. Also winning were Cebu City’s Christian
Klent Pondoyo in boys blitz, Dasmarinas, Cavite‘s Marie Antoinette San Diego in girls rapid, and Sta. Rosa, Laguna‘s Shania Mae Mendoza in girls blitz.
Zamboanga nailed two golds in weightlifting held at SM Transport Hub through Aldrin Garcia in boys 34kg, and Geraldine Climaco in girls 49kg. Ma. Paula Lanit of Tagbilaran copped the girls 36kg gold while Vanessa Sarno ruled the girls 32kg top plum.

Alexis Soqueno added another title to his 110 Hurdles Final in the afternoon he timed 14.77 (wind +2.0) the fastest time in the history of this meet. Soqueno who earlier had a meet record in the High Jump of 1.93m added this event and later the 4×100 relay crown to emerge as a triple gold medalist.

Karen who is the second-fastest Filipina Hurdler last year then took the 100 Hurdles final in 16.46, which was below her best of 15.43 from the PNG. Karen tripped over some hurdles at the start but was still able to win the race with Nina Antiola of Cebu second in 16.65. Ann Tubal of Bacolod City was third in 16.80. Karen teamed with Olorvida in the girls 4x100m relay to win in 51.5 from Negros 52.0 and Iloilo 52.3.

The Girls 1500m was also very impressed with barefoot teammates and palaro record-holders Angelica De Josef of Aklan holding off a powerful final sprint from her teammate Joneza Mie Sutituedo of Iloilo the camera separated the blanket finish at 4.52.45 to 4.52.48.

I arrived in Bacolod, and after a one hour wait for a van to the Grand Regal Hotel settled in for an early night sleep (7.30 pm) as I have a big day ahead. This was the first time I had been in Bacolod since I first came here to play the National Games back in 2011, it was a memorable moment for me as I placed second in the Men’s 100m Dash Final at 27 years of age.

A last-minute decision by the organizers allowed the event to be open to any athletes as well including non-qualifiers.

Negros Pride Alexis Soquino broke the Batang Pinoy record with a leap of 1.93m. Even though there are no standing records available yet I have not compiled any due to time constraints.  Soqueno performance was also the best ever by a 15-year-old Filipino all the time.

One of the athletes to watch out for in 2014 is Karen Janario who is a product of the Leyte Academy of Sport and coached by Trece. Trece discovered Karen playing around at an athletic meet one day and decided to recruit her. Karen who is primarily a hurdler timed 15.43 to win the 2013 PNG youth division which is the fastest time ever run by a 14-year-old in the countries history, following this up with a 15.6 time on the slow dirt track at Maasin during the Visayas qualifying leg of the Batang Pinoy.

Karen started off the meet well with a clocking of 12.5 to win the first heat. While her teammate also coached by Trece Rose Marie Olorvida clocked 12.6 to win the second heat. It was a quality competition in the girl’s event as Celestina De Castro of Taguig City. The fastest qualifier and winner of the Pampanga leg clocked 12.7. In fact, the fastest six girls clocked times below 13 seconds which is the most successful in the meet’s history.

Gino Dogoldogol showed he was a force to be reckoned with topping the boys 100m heats in 11.0. The boy from Koronadal city had an age grade record for 15-year-olds in the Davao leg of the meet. Mark Baljeboco of Negros Occidental had the second-fastest time in 11.1. Teammate Jose Belibestre was third in 11.2.

Balajeboco was the fastest in the men’s 400m with 51.4. Kenneth Nodos who won the Mindanao leg had the second-fastest qualifying time of 52.4. With his teammate Dogoldogol sharing the same time.

Angelica De Josef who is better feated in the Palaro for her middle distance titles. Was the fastest in the 400m heats from Tacloban’s Gemalyn Pino 1:01.1 to 1:01.2.

Rey Mark Quezada of Baguio who was third in the Pampanga leg of the meet. Got the better of his two teammates with his two teammates from Marikina City both unable to finish the race. Quezada won the 5k in  17:10.2.

In the girls, Long Jump 13-year-old Romerose Villauneva of Negros emerged the winner of this event with 5.18m, ahead of Rose Marie Olorvida of LSA and Gianeli Gatinga of Taguig City.

2013 Batang Pinoy Finals in Athletics is January 29-30 at Panaad Park, Bacolod, Negros Occidental. This competition is organized by the Philippines Sports Commission and features athletes born 1998 and after. Three legs were conducted in Davao Del Sur, (Mindanao), a dirt track at Maasin City, Leyte (Visayas), and Pampanga (Luzon). The top three athletes/medalists in each event will proceed to the finals.