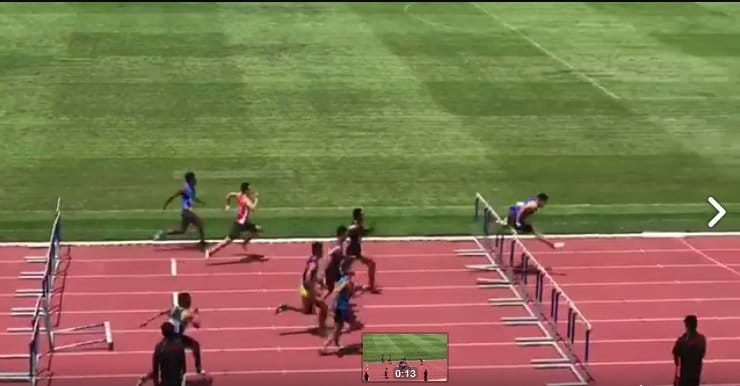 3rd Gold for the Philippines gets back at Thailand

The Philippines 4×400 Quartet of Archand Bagsit, Edgardo Alejan Jr., Joan Caido and Mico Del Prado clocked 3.11.42 to claim the 3rd Gold for the Philippines at the Thailand National Open in Bangkok.

Thailand settled for the silver improving its season best to 3.12.06, and the bronze went to

The Philippines also had clocked 3.12.73 in the heats.

The Philippines took the silver in Thailand in 3.06.84 narrowly behind the Thai’s 3.06.81 the quartet was the same as in Thailand. Except for Ryan Bigyan instead of Mico Del Prado.

At the National Open a different quartet of Eric Cray, Francis Medina, Jomar Udtohan, and Ryan Bigyan clocked 3.16.19 back in March.

The team of Clinton Bautista, Archand Bagsit, Mark Harry Diones and Patrick Unso. Was pretty much a B Team. As the National Team of Eric Cray, Beram, Anfernee Lopena and

Jomar Udtohan had clocked a National Record of 40.29 last March at the Philippine National Open in Ilagan.

With Five SEA Nations improving their best times. Indonesia actually leads the SEA Ranking list with 39.13 ran at the 3rd leg of the Asian Grand Prix in Taipei on April 30. Indonesia did not participate in the Thai Open as they have been training in Japan since April.

SEA Rankings 2017 can be found here 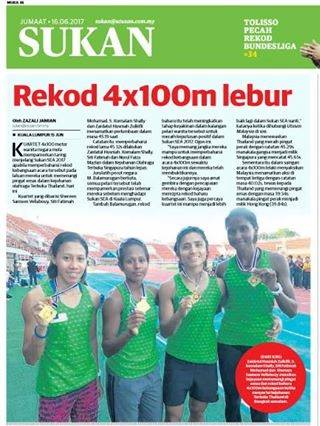 Malaysia Womens 4×100 set a national record Shereen Samson Vallabouy, Siti Fatima Mohamad, Shally Komalam and Zaidatul Husniah Zulkifili clocked 45.19. The mark broke their time of 4532 at the 2016 Singapore Open, the same lineup except Asma Mazlan ran instead of Vallabouy. It wasnt bad for Malaysia’s first hit out. Malaysia took the Bronze at SEA Games 2015. That time with Mohamad, Zulkifli, Komalam and Noor Muhamad Nafiah (45.41 at that time).

Singapore took bronze in 45.65. Improving on their earlier 47.14 hit out. The Thai’ actually ran faster in the heats clocking 45.17. But were unlucky to lose to Malaysia in the finals.

Hyelim Jung of South Korea won the  Womens 100 Hurdles in 13.25 adding to the performance of her counterpart in the Men’s the other day. But not breaking the 12.98 world

SEA Games Bronze medalist Vietnam’s Thi Yen Tran Hoa took silver in the 100 Hurdles improving seasons best from 14.12 to 13.79. In what could very well be a Vietnam women’s rampage of nearly all the track events at the SEA Games.

No Fewer than four national records fell in the 110 Hurdles at the Thai National Open. The clear winner was Byongjum Kim of South Korea who was 5 strides ahead of his nearest pursuers. Kim is the Asian Games Silver medalist and an Asian Champion Bronze medalist won. He clocked a time of 13.39. Improving on his best time of 13.43 from Incheon, Asian Games in 2014, and his seasons best of 13.64 2 months ago in Hiroshima. In the process, Kim broke his own South Korean National Record. In the process, Kim also broke the qualifying standard for the World Championships in London 2017 which will be held August 3 to 17.

Scrambling in a frantic battle for second place came in several athletes. Coming out of retirement was Jamras Rittidet of Thailand who came in second in 13.88, Rittidet is the SEA Games Champion four times from 2009-2015, and holds the SEA Games record at 13.72.

time with 13.91. Patrick is the SEA Games bronze medalist with a time of 14.12. He erased the Philippine national record in this race. Improving on the 14.27 he ran at the PATAFA performance trials 2 months ago. More surprisingly Patrick is coming off back and spinal surgery that put him out for most of the 2016 competitive season.

Anousane broke his own National Record of 14.00 set last year. And it was also a huge improvement on his seasons best of 14.38.

Newcomer Panu Kwanyuen (translated) of Thailand was fifth in 14.08.

Chen Xian Ang of Singapore was sixth in 14.19, but he broke his National Record of 14.39 set earlier in the year at the IVP Series.

Coming in Eighth and last was Clinton Kingsley Bautista who timed 14.46, which is outside his seasons best of 14.37 and the personal  best time of 14.21 set at the 2014 ASEAN University Games.

This represents six athletes in this race breaking their best times and three with national records. Adding to the fact now that recently in Germany Rayzam Shah Sofian broke the National Record of Malaysia with 13.67 and leads the SEA Ranking lists. It represents that four southeast Asian Records have fallen this year. And with Rio Maholtra running 14.13 just outside his 14.10 Indonesian National Record this year it could possibly be five soon. 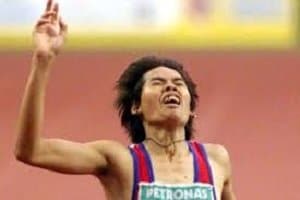 Ubas Gold remained the only one Gold for the Philippines at the Thai Open after Day One.

In 2013 The Philippines had delivered 10 golds at the Thai Open. The Thai Open was a regular part of Philippine’s fixture with much larger teams having been sent. With 2 months to go before SEA Games a clearer picture of performance is becoming available.

Highlights of the Thai Open included SEA Games Champion Duong Van Thai of Vietnam taking the 800 and 1500 in 1.52 and 3.55 the first time he has competed this year. Beating his Thai Rivals.

In the Pole Vault some splendid depth, Pooranot Pooltong the SEA Games Champion was out failing to register any heights. However, three Thai’s leaped over 5.00m. Newcomer Pataphong Umsam-Ang, 20 who had beaten Pooltong in February at the Uni Games leaped 5.10m to secure his first national title. Former three-time SEA Games Champion 2009, 2011, 2013 Kreeta Sintacheewa, 28 leaped 5.00m with his first jump of 2017. A new athlete Naiyatyon Kamniam (unsure about translation) leaped 5.00m for Bronze.

While Kasinpob Chomchand who had won the Asian Youth in 5.00 m, had leaped 4.80m to win the Junior Division.

Ernest Obiena who is the favorite this SEA Games did not participate as he is training and competing in Italy. He has leaped 5.43 m indoors and 5.30 m more recently outdoors this year.

In the Women’s Pole Vault Rachel Bing Yie the SEA Games silver medalist, continued to lead with a dominating 3.91m jump. This came at the expense of the SEA Games Champion Chayanisa Chomchumdee who could only manage 3.55 m, and has only leapt 3.80m in Korea this year she has a PB of 4.21 m.

Le Tu Chinh continued to establish her dominance in the SEA Women’s Sprints.  After her 11.47 season leader and PB. Chinh also doubled up with a solid 23.52 (0.0) run in the 200 meters. Chinh beat SEA Games Champion Veronica Shanti Pereira 23.74 (0.0). Pereira had won the last SEA Games in 23.60. Making Chinh the only SEA athlete with a PB below the SEA Gold medal standard. Sheeren Vallobouy the SEA Games bronze medallist in 400 from Malaysia was a very distant third place in 24.53.

“She is good I think she can win the 200 also at SEA Games. I’m not sure if she will run as fast as 23.50 though at Thai Open” Said Vu Thi Huong the 4x SEA Games 100m Champion who now lives in Australia.

The 20-year-old Chinh 200m was the first run in that event in nearly 12 months. Chinh is the Asian Beach Games Champion 2016. She did not participate in the last SEA Games not even qualifying in the relays.

In the Mens 200m 18 year old Siripon Panpa took control of the race for his home crowd clocking a decent 21.39. Doing the job with the absence of the big guns SEA Games Silver medalist Jarun Sathoengram and SEA Games Bronze medallist Jirapong Meenapra.Punpa held off a trio of  the pressure of three Malaysians breathing down his neck. Khairul Jantan of Malaysia (21.46) who won the 100m yesterday in 10.31. And Gunesgaran (21.47), and Asif Yasmin (21.55).

She was just .02 outside the famous national record of Chee Swee Lee set 43 years ago in 1974 at the Asian Games in Tehran.

The Thai Juniors were faster than the Seniors this year. Pitchiiya Suthoenram won the Junior 400 in 47.15, the 18 year old improved his mark of 47.31 earlier in the year. The Thais now occupy 3 of the Top 6 spaces in the SEA Ranking Lists for the 400m.

In the Mens 3000M Steeple Chase Quoc Hua Lat of Vietnam took the Gold in 9:12.89, Lat is a new Vietnamese athlete that didn’t compete at the last SEA Games.

Purwanto who has a PB of 8.57 had a beautiful neck to neck finish leading upto SEA Games at the 2017 Singapore National Open.

Meanwhile 2013 and 2015 SEA Games Champion Christopher Ulboc Jr. of the Philippines missed the Thai Open as he was recovering from injuries after the National Open in March.

Siew Cheer who threw 64.67m. Cheer has thrown the Malaysian National record at 64.95m this year and leads the SEA 2017 Rankings in Hammer. Cheer was the bronze medalist at the last SEA Games.

Jackie Cheer goes in as the home town favorite for SEA Games. With Caleb Stuart of the Philippines the SEA Games Champion, SEA Games Record Holder and SEA Record Holder.

Janry Ubas showed his 7.88m at the PATAFA Time Trials on June 6 was no fluke (also 7.80, 7.70m). Ubas followed up with the Philippines only Gold Medal on the first day of the Thailand National Open. Ubas won Group 2 and the overall title. D.M.

This gives Janry a strong chance of aiming for the SEA Gold in Kuala Lumpur. The last SEA Games was won by Supanara in 7.75m. Supanara did not participate.

Janry and Fil-Heritage high jumper turned Long Jumper Tyler Ruiz (7.79m) are 1-2 in the SEA Ranking lists are were selected for the SEA Games.

Janry in the 2015 SEA Games took the bronze in the Decathlon before taking a break to focus on the Long Jump. He is coached by Dario De Rosas the Head Coach of FEU.

With 7.78m his third best ever jump only National Record Holder Henry Dagmil has ever leapt further.