Can anyone train hard enough that they can eventually run an 11-second 100-meter dash?

As a sprint coach, the answer to this is definitely no. Let me start by saying I mainly trained female sprinters. But for this answer, I will focus on male sprinters, but I worked at a sports academy and scout sprinters.

So that was the existing athletes at the school sports academy.

I’m talking High school kids here. Then I had to go out and recruit new athletes. At the tryouts, we had like 100 kids run the 100-meter dash. One Christian Senora ran 12.0, but he ran it in bare feet and didn’t know how to use his arms or run properly; he played a bit of neighborhood basketball but wasn’t from athletics; in 7 months, I got him to 10.9 for 100 meters.

A lot of them didn’t want to train for athletics to be sprinters. But at the same time, many kids wanted to be on my team, but they didn’t have the genetics.

So if I had to estimate there was probably about around 15, maybe max of 30 kids in the province who could run under 12 seconds, heck I had one who ran 10.9, but in the whole 5 years of the sports school, nobody had broken 11 sec in the 100-meter dash, heck nobody since has come close to it from that province in the last 2 years.

Can anyone run under 11 sec for a 100-meter dash? Here be some factors?

So What do you think? Please leave an answer in the comments?

Next, Write up on Athletes I sent to Manila and how they fared? or didn’t fare? Under new coaches.

1: Train with other high-speed people

Live with them. Make it your whole life. There aren’t many guys who train with no one their speed. Yohan Blake puts his speed down to constantly trying to beat Bolt in training, and I suspect a great deal of the speed of any sprinter is competition within the training group.

During the tiny contraction times in the maintenance phase sprinting, there is no time to generate the gym’s forces, even from fast-weighted movements.

He has since won national medals and been on the Olympic team, and I think his 100 meter PB is now 10.1. He moved up to 200m, though, so this is his better event now.

I don’t know many athletes who have had this improvement by doing weight training. Jumps and plyometrics are how to increase the force you put into the floor during top speed!

3: Don’t listen to the coaches trying to mold your technique into what they want just to fit into an average or a desired model.

I find almost invariably that athletes do best in their natural postures (assuming they are well trained in sprint technique already) except for cases of pelvic tilt (50:50 whether bringing the pelvis into neutral slows them or speeds them up) and neck posture (almost improves speed).

Minor corrections aren’t included in this, just major technique changes. In particular, in the drive phase, be wary about changing technique, particularly if your start is perfect already. I see many great athletes go to big coaches. And the coaches force them into new techniques cos that’s what that coach does. And the athlete’s plummeting 100-meter times stop their freefall, and the athlete stops improving.

4: PB as high as possible in the hang snatch or high hang clean

(catching the bar in the clean but without sinking), explosive hip thrust, and a weighted quarter squat jump. I’m talking 100 kg, 150 kg, 100 kg respectively for girls and another 50% on that for boys if you want to get sub-11.

This is for maximizing power put into the floor during the early drive phase. At these force outputs, just tapping the floor will send you forward with immense impulse. Almost every race has the same positioning at 10 m as of 100 meters. If you win a race to 10 m, you probably win to 40 m, so get a great first 10 m, and people will have to be much faster than you to beat you to 100. Power also cleans very well.

5: Do starts ALL THE TIME. Starts are improved a great deal just through repetition.

Speed endurance separates you from the people within 1 or 2 tenths in speed. However, speed endurance training makes you slower. Look at any time a sprinter stops doing 100 meters to ‘work on their 200m’ and notice their 200m performance nosedives.

SPEED training makes you faster. Minimize the speed endurance sessions- it’s like making your engine smaller to minimize fuel usage so you can win a car race. Not going to help compared to the loss of power. Any time you are training, and you aren’t fresh, you are developing your endurance.

If you are training at a low intensity, you train your ability to perform at low intensity. If you are doing a run fresh and completely flat out, you are developing your ability at extremely high power outputs. This is when you develop your 100-meter speed and improve it.

7: Stop all the gimmicks like stretching too often and over-healthy eating.

Look at a gazelle’s hindquarters- glutes and thighs are basically jammed into a big ball with a super long tendon at the bottom that goes down to the hoof. This ball contracts, and the gazelle explodes away.

Usain Bolt’s training group includes the two fastest men in world history (Bolt 9.58 and Blake 9.69) and many other big names, and they eat jerk chicken and McDonald’s and curry all the time. When I have seen athletes do diets such as removing chocolate or giving up fast food, their times usually suffer!

Find the diet that your body needs for maximal sprint performance, not what the local bench press expert tells you from what he read online once by a guy who only does leg day once a year who heard it from his doctor who didn’t actually get any nutrition training during his education (UK doctors receive about 20 minutes in their entire education).

Don’t do anything if you don’t know the reason why! This includes obvious things such as stretching too much or eating too healthily. You do you.

8: Train with other speedy people. I can’t state this enough.

There are many things you will need to do to get sub-10 seconds for a 100-meter dash. Chances are you still won’t. But I feel doing these 8 things will maximize your ability to get there. Do high-speed sprint sessions with high-speed people and do plenty of jump sessions!

I have highlighted various fixes to his form and program that led to those remarkable improvements in time. I sent the athlete to a coach in Manila after this. Christian’s best time with me for 200m was 23.7.

Under that coach, he did improve to 22.69 at the Filipino Chinese National meet in 2019. But had the speed already to do it. We did not train for the 100-meter dash the short time I coached him. So that speed was in reserve for the 200m.

The athlete followed up the 200m with 22.97 to take Bronze at the Weekly Relays Final.

He, however, did not really show significant improvement under his new coach in the 100m.

However, I can not be held responsible for his performances after I finished coaching him.

So will give credit for the 200m improvements to the new coach but the 100m time remains fairly inconsistent with 11.30et at the weekly relays.

EMAIL ME AT PINOYATHLETICS@GMAIL.COM FOR COACHING INQUIRIES 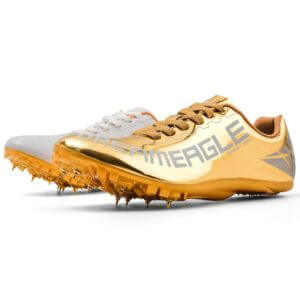